Get Your Angola Tourist e-Visa On Arrival Online Now

How to Apply: eVisa on Arrival

Want to visit Angola soon? Angola re-opened to visitors in September 2020. Furthermore, in March 2018, the Migration and Foreigners Service Office implemented a pre-registration system for the Angola tourist visa on arrival.

Avoid any hassle and uncertainty for your upcoming trip to Angola. Instead, find the most up-to-date information about the process of your Angola visa application and other entry permits or travel documents needed on iVisa.com.

What is the Angola e-visa registration?

The Angola Visa pre-registration is the official travel document needed by foreigners wishing to enter the Republic of Angola for tourism, business, or family visits. The Angola visa pre-registration process is done 100% online. This pre-approval helps avoid long queues at the border and allows travelers to receive a physical Angolan tourist visa when arriving in the country.

Once obtained, you’ll get a visa on arrival in Angola. Please note that this is not a work visa. Living and working in the country is not permitted with the Angola tourist visa for foreign nationals.

Do I need to apply for an Angola Visa?

Nationals of over 65 countries can apply for an Angola eVisa on arrival. The Angola pre-registration is also called a ‘Landing Authorization’. It does not automatically give travelers the right to enter Angola.

The immigration authorities at the airport may still decline your entry based on other immigration necessities or when they feel that the national interests or security of the country might be compromised.

How long is the Angola Visa valid for?

The Angola visa on arrival is valid for 30 days in Total. The pre-registration must be used within 60 days of being granted for your Angola e-visa.

Every person who intends to visit Angola must submit their travel registration up to 72 hours (3 days) in advance. You must have an approved Angola e-visa before traveling or you may be denied entry.

Which documents do I need to provide in the visa application form?

The following documents and information are required to approve your Angola visa application form:

Do I need an Angola Tourist Visa if I’m transiting through the country?

All visitors with a short stopover in Angola and traveling to another country as their final destination will need to get a non-renewable transit Angola visa. This transit e-visa must be used within 60 days and grant you up to five days of stay. This type of Angolan visa cannot be extended.

How do I apply for the Angola Visa online?

Simply follow the following three steps to [use the Angola visa services of iVisa.com]. Once submitted, our expert team will take care of your request and send the final Angola visa pre-registration document to the email address you provided during the application.

You will receive an email with a confirmation of your Angola visa. Once you arrive in the country, you need to show a printed version, together with any other required documents at the airport, and you can begin your journey.

What are the costs and processing times of the Angola Visa?

The Angola Visa on Arrival costs USD 120.00, which must be paid upon arrival in cash.

Additionally, you have to pay the service fee of iVisa.com to process your pre-registration for the Angola Visa application form, which varies according to the processing time you choose:

Traveling to Angola with children

An Angola travel authorization is required for all children traveling without one or both parents. The parent or legal guardian needs their own application for an Angola Visa. 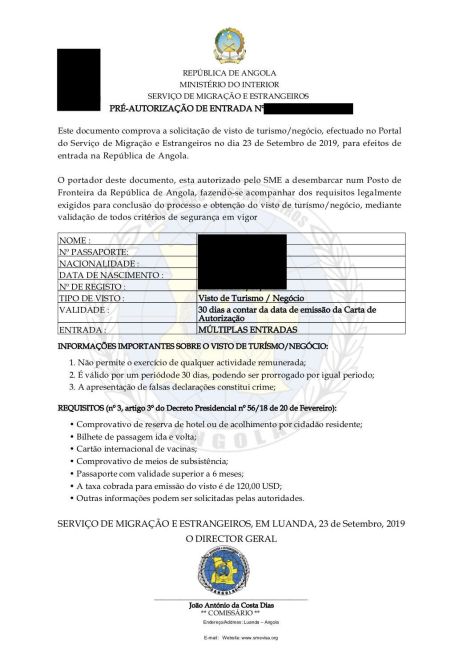 Travel during the COVID-19 is never risk-free. The country of Angola may further restrict travel or bring in new rules at short notice, for example, due to a new COVID-19 variant. Therefore, make sure you are aware of any changes that may cause your trip to be delayed.

Do I need to take a COVID-19 test before traveling to Angola?

All travelers must undergo a PCR-test with a negative result no more than 72 hours before departure. Upon disembarking, air passengers are subjected to a rapid COVID-19 test.

Do I need a COVID-19 vaccination certificate to enter Angola?

No, COVID-19 vaccination certificates are not mandatory to enter Angola. However, unvaccinated travelers may be subjected to a 7-day self-quarantine. Since information may change quickly, we advise you to follow up on the latest Angola travel and Angola Visa information by contacting your local Angola consulate or embassy.

Do I need to quarantine in Angola, even with an Angola visa?

Fully vaccinated travelers aged 12 and over who test negative on the arrival test are exempt from quarantine requirements.

If you’re not fully vaccinated, or you test positive on arrival, you may have to self-quarantine for seven days.

What else should I keep in mind before traveling to Angola?

There are a few extra things to keep in mind during the application process for the Angola Visa pre-registration:

Can I change the information on the pre-visa on arrival after it’s been issued?

No, we cannot change any details on the Tourist Visa on Arrival once it's issued. If you do, however, realize you made a mistake before your visa was issued, then please contact us ASAP via online chat or by sending an email to [email protected].

You can contact us through our customer support team if you have any questions regarding your tourist visa or via email at [email protected]. We are available to answer your questions 24/7.

Note: The cost of the Angola eVisa on Arrival is USD 120.00 which must be paid upon arrival.

The Angola eVisa on Arrival is only available for travelers that plan to enter Angola through one of the following ports:

The Angola eVisa on Arrival (Landing Authorization) does not provide automatic right of entry into the country. The Immigration Officer at the port of entry may refuse entry to any person, if they consider that such person is unable to fulfill the immigration requirements or that such person's presence in Angola would be contrary to national interests or security.

What requirements should my passport meet if I want to apply for an Angola eVisa on Arrival?

Your travel document has to be valid for at least one year after your eVisa expires and have at least 4 blank pages.

Can I extend the stay period of the eVisa on Arrival?

Yes, the Angola Tourist eVisa on Arrival stay period can be extended by up to 30 days in Total. However you would need to contact an Angolan diplomatic and consular missions to do so.

Can I work under an Angola eVisa on Arrival?

No. Work or any paid activity is prohibited under an Angola Tourist eVisa on Arrival.

Which citizens can apply for an Angola eVisa on Arrival?

Can I enter to Angola through any port of entry?

You can enter Angola through the Luanda Airport (4 de Fevereiro), Lubango Mukanka Airport and the Luau, Santa Clara and Massabi, Calai and Katwitwi borders.

What do I need to present upon arrival in Angola?

Upon arrival in Angola, you will have to present your passport along with your printed eVisa on Arrival (also known as Authorization Letter) and all the documents you submitted with your application.

Located on the South West coast of the African continent, the Republic of Angola is the perfect choice for those travelers who want to enjoy an unusual holiday. The country is full of hidden beaches and great cultural wealth. It is the seventh largest country in Africa and the official language spoken is Portuguese. Only the Atlantic Ocean lies to the West of Angola; with Namibia and Botswana bordering it to the South; the Republic of the Congo to the North; the Democratic Republic of Congo to the North and East and Zambia to the East.

Angola has rich and varied ecosystems, with dense rainforest in the north, a temperate coastal strip, an interior mountain range rising to over 2500 meters (6,000 ft) above seal level, and savannas in the interior South and South-East. The highest Mountain in Angola is Morro de Moco, which reaches an altitude of 2,620 meters (8,592 ft). Across the entire length of the country, Angola has a stunning array of landscapes waiting for curious travelers to come explore. The capital city of Angola, Luanda, is located on the country’s Atlantic coast.

It is the largest city of Angola and separated is generally separated into two main sections: the Baixa de Luanda (lower part of the city) and the Cidade Alta (upper part of the city). Due to the country's oil boom in the last twenty years, there has been a major regeneration within the city. However, the city still has plenty of charm thanks to the scattered Portuguese architecture, vivid nightlife along the waterfront, historic monuments and hilltop suburbs. In addition to its historical sites, in the areas around Luanda there are many other attractions.

These include the Kissama National Park, Kalandula Falls and Ilha do Mussulo. The waterfalls on the river Lucala at Kalandula are either the second or third tallest in Africa. Irrespective of ranking, at 105m high and about 400m wide they are spectacular and well worth making the effort to visit them. As a country with 1,600km of coastline, it comes as no surprise that Angola has many impressive beaches. If you’re into surfing, Cabo Ledo claims to have one of the longest left-hand waves in the world, with rides often exceeding 500m. If you’re looking for a more laid-back atmosphere, drive down to Sangano for a clean white sandy beach with views of the local town and fishing boats. Another option not too far from the capital is Shipwreck Beach, where you can take beautifully artistic photos of the rusting remains of tankers, cargo ships and fishing vessels. Angola's culture is influenced by different ethnicities additional to Portuguese.

The most prominent are Bantu, Ovimbundu, Mbundu, Bakongo and Chokwe. Angola is home to a diverse indigenous and musical culture. In the Namibe province, travelers can spend time with the topiary-haired people of the Nhaneca-Humbe tribe where you can visit the prehistoric rock paintings at Tchitundo-Hulo. If you are feeling more intrepid, mingle with the Tchokwe tribe in the Lunda provinces, whose ritual masks are so important they have become collectors' items. Luanda's yearly jazz festival is one of the city's annual cultural highlights, together with the Luanda Blue Fest, which is fast becoming an important fixture on the social calendar, attracting both national and international hip-hop and kuduru music stars.

Angola is best known for Kizomba, a very sensual dance style to Zouk music, a genre that combines Portuguese romantic lyrics and African rhythms. However, Kizomba is still a relatively new dance style which has in recent years become more and more popular, to the point it is now Angola's unofficial national dance style.