How to Apply: eVisa

In January 2017, the Republic of Azerbaijan introduced electronic visas for citizens of 81 countries. The system is called ASAN Visa and issues single-entry visas for up to 30 days in Total. This new e-Visa system makes traveling to Azerbaijan much easier since you no longer need to visit your country’s embassy. Today, citizens of 93 countries can apply for an e-Visa through the ASAN Visa system and can get the Azerbaijan e-Visa in just 3 steps.

This visa is a pre-entry permission for travel into the Republic of Azerbaijan: it is not sticker or stamp in your passport. iVisa will email you the document which you must print out and present with your passport at the border control post.

What is the Azerbaijan e-Visa?

It is an official document which provides authorization to travel to and from Azerbaijan and is electronically linked to your passport.
What do I need to apply for an Azerbaijan e-Visa?

What is the cost to obtain a Azerbaijan e-Visa?

It depends on the processing time you chose. We offer three options:

How long is the Azerbaijan e-Visa valid for?

Passports must be valid for at least 6 months from the date the e-Visa is issued. Also, it should have at least one blank page.
Should I attach my Azerbaijan e-Visa to my passport?

No. You must present your Azerbaijan e-Visa to the border authorities along with your passport. You can print it but you must not staple or stick it to your passport.
What should I do if I have two passports?

Travelers with dual or multiple citizenship must choose the country of nationality in accordance with the passport to be used for their trip.
How long can I stay inside Azerbaijan with an e-Visa?

You can stay in Azerbaijan for a maximum of 30 days in Total. Please note that if you are planning to stay in Azerbaijan longer than 10 days, you need to register with the State Migration Service of the Republic of Azerbaijan once inside the country. You can do this by asking your hotel to apply on your behalf - they will be able to assist you.
Am I allowed to leave and re-enter Azerbaijan with my e-Visa?

If your Azerbaijan e-Visa application is rejected, you may re-apply at a relevant diplomatic representation (embassy/consulate) of the Azerbaijani government.
Do I need a transit visa if I have a layover Azerbaijan?

No. You do not have to get a visa if you are not going to leave the international transit area.
I would like to stay longer than the 30-day limit in Azerbaijan. Is this possible? What can I do?

You will have to apply with the State Migration Service of the Republic of Azerbaijan – iVisa cannot assist you in extending your stay in Azerbaijan or applying for a visa valid for longer than 30 days in Total.
What nationalities are eligible for an Azerbaijan e-Visa?

You can use our visa checker at the top of this page to see if your nationality is eligible for an e-Visa.
How will I get updated regarding my Azerbaijan e-Visa application?

You will receive a confirmation email right after you apply and pay the fee. Check your spam folder if you did not receive anything. You may also contact us via online chat or email us for confirmation. Once your e-Visa is approved, we will notify you via email.
Vaccination requirements to travel to Azerbaijan 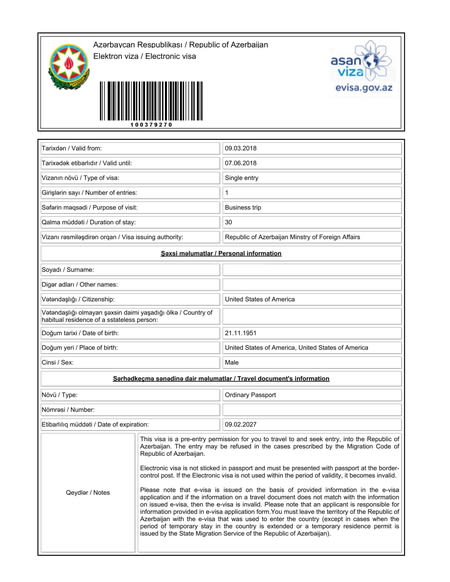 Visa Policy of Azerbaijan
Do I need a COVID vaccine or vaccination certificate to enter Azerbaijan?

No, you don't. As of today, COVID vaccination passports or certificates are not a mandatory to enter Azerbaijan. Since information may change quickly, we advise you to follow up on the latest Azerbaijan travel updates and/or contact your local embassy.
Learn more about Azerbaijan Tourism