How to Apply: Pre-Arrival Registration

On January 1st, 2019, the Cape Verdean government announced that citizens of European Union, United Kingdom, Switzerland, Norway, Iceland, Liechtenstein, Monaco and Andorra must now complete a Pre-Arrival Registration in order to enter Cape Verde. This Pre-Arrival Registration allows travelers to enter the country for tourist purposes and enables them to stay in Cape Verde for up to 30 days Per Entry. The process is very simple and 100% online. Once the application is submitted and accepted, the applicant will receive an official document that must be shown to the immigration officers upon arrival.

The Cape Verde Pre-Arrival Registration is an electronic admission document which travelers can complete in advance of their intended arrival date, and thus avoid wasting time and paper at the airport. Applicants will receive their Pre-Arrival Registration via email. iVisa offers this service to help travelers save time and avoid long lines at the airport and it carries a service fee.

What is the Cape Verde Pre-Arrival Registration?

What is the cost to obtain the Cape Verde Pre-Arrival Registration?

How long does it take to process my Cape Verde Pre-Arrival Registration?

How long is a Cape Verde Pre-Arrival Registration valid for?

Your travel document has to be valid for at least 6 months after your intended date of departure from Cape Verde.
Who can apply to Cape Verde Pre-Arrival Registration?

The traveler must apply for the Cape Verde Pre-Arrival Registration at least 6 Business Days before the intended travel date to Cape Verde.
Vaccination requirements for travel to Cape Verde

Does obtaining a Pre-Arrival Registration guarantee me entry into Cape Verde?

NO. Possession of a Cape Verde Pre-Arrival Registration does not provide automatic right of entry for the holder into the Country. The Immigration Officer at the port of entry may refuse entry to any person, if he is considers that such a person is unable to fulfil the immigration requirements or that such person's presence in Cape Verde would be contrary to national interests or security.
What do I need to present upon arrival in Cape Verde? 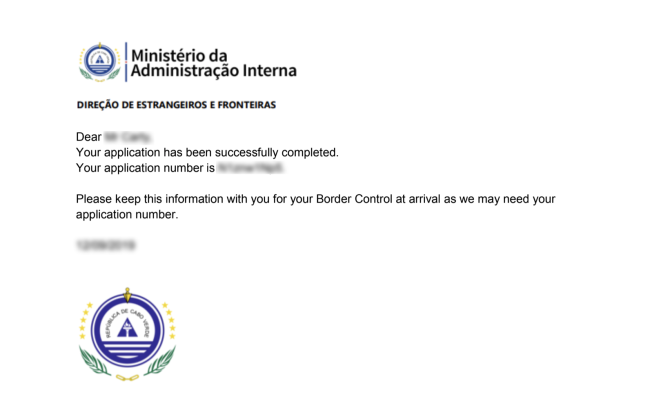 Do I need a COVID vaccine or vaccination certificate to enter Cape Verde?

No, you don't. As of today, COVID vaccination passports or certificates are not a mandatory to enter Cape Verde. Since information may change quickly, we advise you to follow up on the latest Cape Verde travel updates and/or contact your local embassy.
Learn More About Cape Verde Tourism

If you are looking for a new vacation destination, you may want to try Cape Verde. It is also known under its Portuguese name as Cabo Verde. It is located in West Africa, and even though the islands that form Cape Verde lack many natural resources, the nation has thrived in the last few decades, and it is now one of the most stable countries in the region. It is also one of the most politically liberal countries in Africa and the world. Before you start planning your vacation to Cape Verde, perhaps there are a few things you may want to know. The information below is pretty basic, but it should help you get started.

The first thing we will cover is entry requirements. The good news is that Cape Verde has a pretty lenient visa policy. There are 57 countries and territories, most of them from Europe and Africa, whose citizens are exempt from getting a visa if they plan a short stay in Cape Verde. They must, however, register online and pay a fee when they arrive at the airport. The pre-arrival registration is something iVisa can help you complete with very little effort. All you need is a valid passport that remains valid for another 6 months from the date of departure from Cape Verde.

A visa on arrival is also available for all nationalities that are not visa exempt, except for the citizens of Morocco. This type of visa can be obtained only at specific points of entry. You can obtain one at Sal, Boa Vista, Sao Vincente, and Santiago International Airports. If you find yourself in this category of travelers, all you need is a passport with a validity of 6 months after departure from Cape Verde. You must also pay a fee.

Moving on to tourism in Cape Verde, it is important to know that timetables are not taken seriously. If you want to go island-hopping, try to arrive for your departures ahead of time, because boats can sometimes leave before their scheduled departure. Flights are also often canceled or delayed, but that is due to weather conditions, which can get rough sometimes.

The official language in Cape Verde is Portuguese, but most people actually speak Cape Verdean Creole. While this particular language contains about 95% Portuguese words, a person that speaks regular Portuguese will probably not be able to understand it. Very few people speak English, but some of them know French. However, if you want to be able to get around, we recommend that you learn Kriolu or at least Portuguese. It will be of help when you are on the islands.

As to what to do in Cape Verde, you can take your pick of a few available activities. Game fishing is very popular with tourists. You can hire a boat and have someone teach you how to fish if you have never done it before. It may get boring at times, but when you see yourself with a 4-foot fish in the boat, you will be pretty excited.

Kite surfing is yet another favorite activity among tourists who decide to stay in Cape Verde for a few days. If you have never done it before, you can have someone teach you. It will not be easy at first, but you will have a lot of fun learning; just prepare to hit the water often! Other water sports such as jet skiing are widely available.

You may also want to try canyoning in Santa Antao. Just be advised that it can be quite dangerous, and the medical facilities in Cape Verde are not among the best. If you do not feel up for it, then you should go on a hike on Fogo; it may be safer option, if you have the fitness level required. Keep in mind that Cape Verde is the home of the famous coffee of Fogo. Most people have had great coffee before, but nothing begins to compare to the coffee you will try in Cape Verde. The taste is so intense that you will think there is an entire coffee plantation in your mouth. A lot of tourists enjoy this experience, and so should you.

If you like seafood, then you are in for a treat while in Cape Verde. It is known for its fresh seafood. Tuna is prevalent, but you also have the opportunity to try Wahoo, which is similar to tuna, except that it is a white-fleshed fish. The local cuisine includes multiple dishes that you will absolutely love if you like seafood. One of them is lagostada, which is a lobster dish. The cachupa is also something you should try. In fact, cachupa is the national dish. It is prepared with maize and potato. For meat, you can ask for either fish or chicken. Whichever you choose, your taste buds will be grateful. You can also try the tosta mista, which is a sandwich with toasted ham and cheese.

European food can also be found in Cape Verde, but the most common is Italian, especially on the island of Sal. When it comes to safety, Cape Verde does not pose any concerns. The crime rate is incredibly low. As you can imagine, petty thieves make their way into a large crowd, but that is applicable to any country you may visit. As long as you do not keep your valuables out in the open, you should have nothing to worry about.

When it comes to health, Cape Verde does not come with threats. The tap water is drinkable, but only in resorts. When you get out, please make sure to consume only bottled water. It is widely available. In the unlikely chance that you do not have bottled water on you, you should boil water before drinking it.

The people in Cape Verde are incredibly nice and welcoming. They are generally friendly. Many people from Senegal are now immigrants in Cape Verde, and you are most likely to be approached by them. They may try to sell you something. In case you say no, they will try to win you over with sad stories about their families at home. Whether or not you buy something is up to you. Just remember to bargain if you do.

All in all, you are bound to have an excellent time in Cape Verde. People travel there mostly for the resorts. The truth of the matter is that Cape Verde makes for a unique place where you can get some R&R. It is quiet, and the seafood is excellent. You do not need much more for a great vacation.