Ireland may seem big when you’re planning out your travels, but it is, in fact, a relatively small island making it pretty easy to explore. We’ve created a list of ways to get around Ireland.

The storybook landscape of Ireland is made for dreamers to explore. Much of its roads cut through the lush green scenery and appeal to those who love to drive. With cheap rental cars costing about $30 a day or less, it’s no surprise that most people opt to drive the Ring of Kerry and Wild Atlantic Way.

However, it is not the only way to experience the picturesque parks, medieval castles, and winding country roads. Here is a guide on how to get around Ireland regardless of your driving ability, budget, or accessibility needs. Also, check out our ultimate guide to Ireland for practical tips and visa instructions. 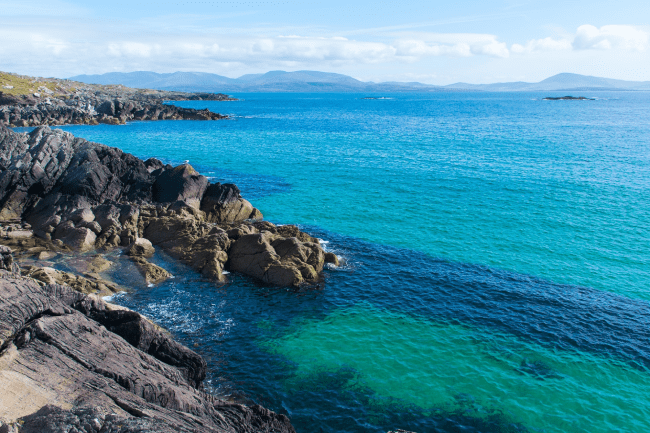 Renting a car in Ireland

Ireland is home to some of the best self-exploration routes to drive, and it is no secret that the best way to enjoy the country is by car. In most major cities, car rental in Ireland and motorbike options start from as little as $30 a day.

However, it is important to note that, despite there being a fair number of major national roads and motorways, side roads tend to be very narrow and windy, so be prepared to be challenged.

License requirements to rent a car in Ireland

Remember that to drive in Ireland as a tourist, you will need a valid driving license or an international driving permit that you must have on you at all times. European Union licenses are treated like Irish licenses, while non-EU driving permits are valid in Ireland for a year.

When renting a car in Ireland, you will be expected to buy a collision damage waiver, and insurance as Ireland requires all vehicles on public roads to be insured. If you are crossing into Ireland with your car or motorcycle, check that your insurance covers it.

Always note the speed limits in Ireland and distance signs. Please note that in Ireland speed limits are in kilometers, while in Northern Ireland, it is usually in miles.

Other basic laws and rules to keep in mind include driving on the left, overtaking on the right, and wearing safety belts for everyone in the car. Children under 12 may not sit in the front passenger seat. There are many roundabouts, be aware that when entering one, you need to give right of way.

Contrary to popular belief, it is entirely possible to explore Ireland without a car. In fact, Ireland has an extensive network of public and private buses, as well as trains, at your disposal, in both major cities and in the countryside.

Bus services are beneficial for those on a budget as it is the most cost-effective mode of transport in the country. A bonus of bus travel in the cities and major towns is that you’re more likely to interact with locals in local buses who can give you the best tips, tricks, and spots to get the most out of your trip.

Visitors planning to use the public bus system in Ireland should download the National Journey Planner app created by Transport for Ireland. The app shows bus routes, bus and train schedules, as well as bus stations, making planning a breeze. Bus Éireann bookings can be made online. However, seats cannot be reserved.

Another great option is using private bus companies, which are in direct competition with Bus Éireann. Private bus services tend to run more regularly in areas where national buses are hard to find or run irregularly. There are only a few bus tour companies that offer longer bus journeys.

These train services are another great way to move around Ireland without a car. Since Ireland is on the smaller side, train travel tends to be quick, even if you’re crossing into Northern Ireland. Though the fares tend to cost a little more than the buses, if you book in advance, you will get a much more competitive rate, making it a viable option.

In the Republic of Ireland, train networks are managed by The Irish Rail, and in Northern Ireland, Translink NI Railways runs the railroad system.

Getting around by bicycle in Ireland

Another way to get around Ireland without a car is to cycle. Though not a particularly common method, it is perfect for those who love the outdoors and a good workout, as well as cycling enthusiasts.

Many companies also offer cycling tours in Ireland. Some fantastic options include the Irish Cycling Safaris and Green Marble Tours. Visitors can choose to have a self-guided or a guided tour. It's advised to rather rent or hire a bike than bring your own as transporting to and from the country can be costly.

Keep in mind that the weather in Ireland is relatively unpredictable, and the roads are pretty narrow, and in the countryside, they can be quite bumpy and uneven. Be aware of fast drivers and stick to special cycling tracks like Great Western Greenway in County Mayo.

Whether you’re driving, cycling, or using public transport around Ireland, there is one mode of travel you will need during your Irish adventure; ferry travel. To get to any of Ireland's offshore islands, you must catch a passenger ferry or a boat. Ferries work across rivers, inlets, and loughs and are particularly helpful for cyclists touring the country.

You can also opt to catch a cruise around Ireland and discover the Shannon–Erne Waterway or other lakes and loughs. This is yet another option for those trekking through Ireland without a car.

Flying into Ireland or Northern Ireland is relatively easy as there are four main airports: Dublin, Cork, Shannon and Belfast. Unfortunately, flying within Ireland is considerably more challenging. This is because connecting flights between the major airports does not happen as the airports are solely for international travelers.

There are regional airports where you can sometimes get internal flights within Ireland. These are Knock, Kerry, Donegal, Galway, Sligo, Aran Islands, and Waterford. All of which tend to have flights from Aer Lingus. Considering how small Ireland is, flying around Ireland is pretty unnecessary and expensive since you can get to most places with cheaper public transport.

To keep it short and sweet, taxis, like planes, are expensive in Ireland. They are available in most major towns and cities and will cost you far more than public transport. However, in a pinch, they are a possible option if you need to get around in Ireland without a car. Uber is also widely available in major cities.

Ireland’s public transport is relatively accessible to everyone as most buses have low-floor access and priority spaces in big cities. Unfortunately, only 63% of the Bus Éireann coaches are wheelchair-accessible. Also, keep in mind that more rural bus stops are not accessible.

Trains are accessible with help. You will need to make arrangements at least 24 hours in advance by calling 1850 366 222 (within Ireland) or +353 1 836 6222 (outside of Ireland). Newer trains provide audio and visual information systems for visually impaired and deaf passengers.

If you’re ready to explore the breathtaking Cliffs of Moher and the winding roads of Ireland, remember to read our ultimate guide to Ireland for practical tips and visa information. Also make sure to read up on upcoming visa protocols, such as the ETIAS for Ireland.

While a golden visa isn’t a direct path to citizenship, foreign nationals can obtain residency in Ireland under the Immigrant Investor Program (IIP)....

Ireland may seem big when you’re planning out your travels, but it is, in fact, a relatively small island making it pretty easy to explore. We’ve crea...

Ireland may be small, but there is plenty to explore. We have hand-picked the best cities to visit in Ireland based on what they have to offer. From c...

Straight out of a fairy tale, Ireland is a country made for dreamers yearning for adventure. The soft rain, rolling hills, and green landscape that st...