Get Your Philippines Travel Authorization Certificate for Taiwanese Citizens

How to Apply: Travel Authorization

THE PHILIPPINES IS CLOSED- The Philippines has not yet re-opened for tourism.

In 2017, The Manila Economic and Cultural Office launched a system that allows citizens from Taiwan to obtain electronic visas instead of standard paper visas.The Electronic Travel Authorization (eTA) application process is very simple and 100% online. Once the application is submitted and accepted, the applicant will receive the Electronic Travel Authorization that must be printed and shown to the immigration officers upon arrival. Yes, it’s that simple.

The Electronic Visa system is an online method of applying for visas from anywhere in the world. Some advantages of this system to the traveler are that visas can be applied for quickly over the internet at any time, from any location and that payment is made online at the time of the application.

What is a Philipines eTA?

The Philippines eTA is a travel authorization that allows citizens from Taiwan to enter the Philippines without applying for a standard visa.

What do I need to apply for a Philippines eTA?

What is the cost to obtain a Philippines eTA?

The cost of a Philippines eTA for Taiwanese is 37 USD. Additionally, there is a service fee, you can see below:

How long does it take to process a Philippines eTA?

How long is a Philippines eTA valid for?

The Philippines eTA has a validity of 30 days after entering the country.

What conditions must the applicant’s passport meet for Philippines eTA?

Your travel document has to be valid for at least 6 months after your eTA expires. Also, your passport should have at least one blank page for stamping.

Which countries are eligible for the Philippines eTA?

At this moment, only Taiwanese visitors can apply for an eTA for the Philippines.

How many entries does the Philippines eTA allow?

The Philippines eTA for Taiwanese travelers (eTA) allows holders multiple entries within a period of 30 days after the date of the first entry.

When should I apply for the Philippines eTA?

The traveler must apply for this eTA at least 2 days before the trip to the Philippines.

No. The eTA is just a landing authorization. It’s up to the country’s customs authorities to allow entry to a visitor after procedure checking upon arrival.

What do I need to present upon arrival in The Philippines?

Upon arrival in The Philippines, you need to present your passport along with your eTA, which must be printed. 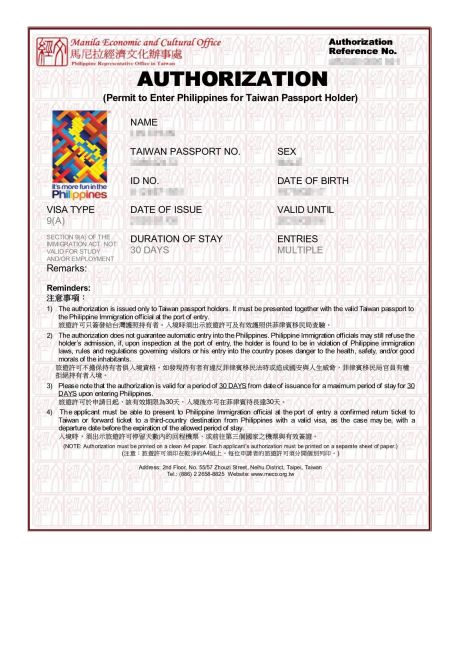 The Philippines is an archipelago in South-East Asia, and it consists of more than 7000 islands. It has one of the longest coastlines, and if you were to do the math, it would take you about 20 years to spend a day on every existing beach. Since the Philippines were colonized by the Spanish, it is now the largest catholic country in Asia. Even so, there are numerous other religions, and diversity is one of the things that make the Philippines such a fascinating country. But before you start making plans for your trip to the Philippines, you should know a thing or two; the information below should get you started.

Whenever you travel to a foreign country, the first thing you should check is its visa policy. After all, you may be required to get a visa in advance. Fortunately, the visa policy of the Philippines is quite lenient, especially when it comes to tourists. For one thing, most nationalities are exempt from getting a visa when travelling to the Philippines. Now, depending on your nationality, you are allowed to stay in the country visa-free for a period that can vary from 14 days to 59 days. If you are among the visa-exempt nationalities, all you need is a valid passport. The Philippines also issues a visa on arrival for almost all passport holders, with a few exceptions. In case you are not eligible for one, your only option is to go to the nearest Filipino embassy and submit a visa application there.

The Philippines has also adopted the electronic visa system, but only the citizens of Taiwan are eligible for an electronic authorization at this time. The document in question is valid for 30 days from the date of issue, it allows the holder to stay in the Philippines for no longer than 30 days, and it grants multiple entries. Leaving entry requirements aside, a trip to the Philippines will prove just how fascinating this country can be. The best time to visit depends on what temperatures you consider optimal. The summer months, which are March through May, are the hottest. You should avoid the rainy season, which is June through October, leaving January and February as the best months to be in the Philippines. Baguio is often referred to as the summer capital of the Philippines because it is cooler. It is located in a mountainous region.

We also recommend that you avoid taking a trip to the Philippines during the typhoon season. A typhoon can occur at any time of the year, but the most active period is considered to be June to September, with August being the most active month. Since the country is known to be the most exposed country in the world to tropical storms, typhoons are destructive and can cause a lot of damage to both properties and human lives.

There are two official languages in the Philippines: English and Filipino. So as long as you speak English, you should have no issues getting around. However, while Filipino English is based mostly on American English, there are a few terms that are specific to Filipinos. For example, a number two is a mistress, while a lowbat is a cellphone on low battery.

Moving on to more exciting things, the Philippines is guaranteed to keep you entertained while on vacation. There are plenty of interesting things to see. If you are interested in the cultural aspects of the country, know that the Philippines have several UNESCO World Heritage Sites. The Banaue Rice terraces in Batad are spectacularly built. The sights are stunning, and you will be able to capture some of the most incredible photos while there. You can also visit some Baroque churches like the Inmaculada Concepción in Manila, Nuestra Señora in Ilocos Sur, San Agustín in Ilocos Norte, and Santo Tomás in Iloílo. They all display impressive European Baroque architecture.

While we are on churches, you may want to check out the Basílica de San Sebastián in Quiapo. The landmark draws many tourists because it is built entirely out of steel. Not to mention that it looks very impressive.

If you are looking for something to do in the Philippines, all you need is time because you can take your pick. For one, the country consists of 7000 islands, so beaches are everywhere. As mentioned in the introduction, you would need 20 years to enjoy a day at each one. However, we can recommend a few choice beaches. One of the most popular and beautiful beaches can be found in Boracay. Words do not do it justice. People put it into songs. The blue waters and sandy beaches make this place a small piece of heaven. El Nido is similar, and so are the beaches of Puerto Galera and Pagudpud. If you are looking for something more remote, we recommend the beaches of Botolan.

Scuba diving is widely popular in the Philippines. One of the best places you can dive is the Tubbataha Reefs National Park. The coral reef and marine life are simply spectacular. You could also check out Anilao.

Filipino cuisine may not be as popular as the cuisine of its neighbors. However, there are a few things that you may be curious to try. Street food is particularly interesting. One dish is called Adidas, but don’t worry. Unlike the shoes, this dish is edible. It is called Adidas because it is made of barbecued chicken feet. You may also be interested in the Adobong Mani and the Banana Cue.

The Philippines is mostly a safe country to visit. Violent crimes are not prevalent. However, as with any other developing country, you need to use your common sense. Do not flash large bills and do not wear visible jewelry. Phone snatching is pretty common in dense urban areas. Other than that, you have nothing to worry about.

The people in the Philippines are usually incredibly friendly. Almost to a fault. As long as you are courteous, you will be treated with the utmost respect. Remember to take off your shoes if you are entering someone’s home, and refrain from looking around when you do. Using words such as ‘Salamat’, which means thank you, will leave a good impression.

Needless to say, a trip to the Philippines can be incredibly rewarding. There are so many things you can see and experience that you will want to go back a second time. The beaches are pristine, the cultural tours are educational, and the people are welcoming. You should definitely give it a try when you have the chance.