How to Apply: Conference eVisa

RWANDA IS OPEN: Rwanda re-opened for tourism on 1 August 2020.

The Rwanda Conference eVisa is an application process rolled out by the Government of Rwanda that is sent by e-mail, it is an initiative that allows any citizen of any of the eligible countries with passports to apply online for the conference eVisa before travelling to Rwanda. People who wish to attend and or speak at a conference, meeting, workshop or seminar in Rwanda should apply for the conference evisa.

Do I need a COVID vaccine or vaccination certificate to enter Rwanda?

No, you don't. As of today, COVID-19 vaccination passports or certificates are not mandatory to enter Rwanda. Since information may change quickly, we advise you to follow up on the latest Rwanda travel updates and/or contact your local embassy.

Do I need to take a COVID-19 test before arrival to Rwanda?

Do I need to quarantine once I get to the country?

What is the Rwanda Conference eVisa?

The Rwanda Conference eVisa is a travel document that is issued through an electronic/online eVisa platform to travellers that want to attend or speak at a conference, meeting, workshop or seminar in this country.

What is a Passenger Locator Form?

The Passenger Locator Form will be used to verify if you’ve had any Covid-19 symptoms. In addition, the Government of Rwanda will use this info to contact you, if you or someone you have been in contact with while traveling to Rwanda develops symptoms of the coronavirus (COVID-19). Please don’t forget that this document must be presented to the immigration officers once you arrive at the airport.

What do I need to apply for Rwanda Conference eVisa?

What is the cost to obtain a Rwanda Conference eVisa?

The costs will vary according to the processing time that you choose. These are the three alternatives we have for you:

Note: The prices mentioned above are the cost of the Conference eVisa. If you wish to add the Passenger Locator Form, you just need to add the amount of $ 9.95 in each processing time.

When should I apply for the Passenger Locator Form?

This online form can only be submitted within 120 hours before your departure.

If I plan to travel with my children do they need to get a Passenger Locator Form?

Each passenger must complete an individual form. Individuals under the age of 16 traveling with a guardian/parent may not need to complete their own form as long as:

How long is the Rwanda Conference eVisa valid for?

What conditions must the applicant’s passport meet for the Rwanda Conference eVisa?

Your passport must be at least six (6) months valid to apply for Conference eVisa.

When should I apply for the Rwanda Conference eVisa?

The applicant should apply at least 4 Business Days before the trip.

What documents do I need to present upon my arrival?

All Applicants must present:

How many entries may I allow to use this Passenger Locator Form?

This document can only be used for a Single Entry to the country of Rwanda.

How many times can I enter Rwanda with the Conference eVisa?

The Conference eVisa is just for a Single Entry .

Does obtaining an eVisa guarantee me entry into Rwanda?

NO. Possession of a Conference eVisa for Rwanda does not provide automatic right of entry into the country. The Department of Immigration and Citizenship Services may refuse entry to any person, if they consider that a person is unable to fulfill the immigration requirements or that such person's presence in Rwanda would be contrary to national interests or security.

Where can I check more info?

You can read extra information about Rwanda eVisa and Passenger Locator Form here.

If I have more doubts, where can I contact you?

If you still have questions, you can contact our super agents at any time or send us an email at [email protected]

Which nationalities are eligible to apply for the Rwanda Conference eVisa?

Vaccination requirements to travel to Rwanda 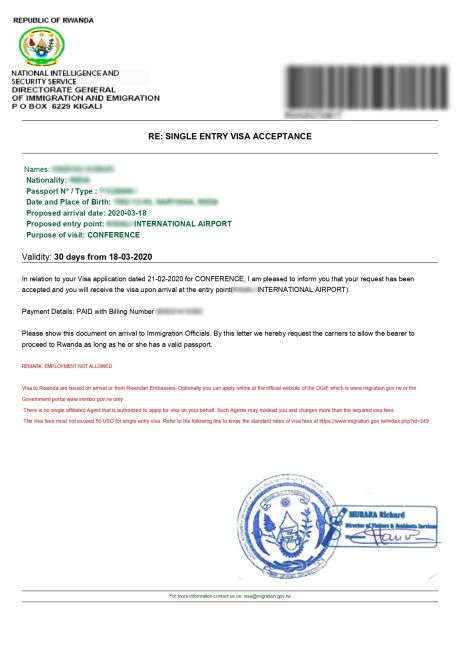 Rwanda is a beautiful country that has grown in leaps and bounds since the tragedy of 1994. The change has been so great that the country is now sometimes referred to as the Singapore of Africa or the Switzerland of Africa. The reason these comparisons are made is because Rwanda has become an example of order, cleanliness, calm, and enforcement of the rule of law. Rwanda has opened its doors to tourism and business and has invested heavily in infrastructure and top-tier hotels. However, in case you were thinking that because it is called the Singapore or Switzerland of Africa you wouldn’t be able to find an authentic African experience here, rest assured this is still Africa. If you want to get to know what day to day life is like in this Central African nation, you need go no further than one of the local markets, where you can see some real action and even, from time to time, a little spontaneous chaos. At the main market in Kigali, visitors will be treated to piles of everything from beautiful multi-colored broad beans to carved chunks of cassava root stir the senses. Rwanda is home to a little under 13 million people, of which most live in rural areas. The capital, Kigali, has witnessed the most infrastructure spending since the country has been at peace, but also the areas near the mountains where the gorillas can be found. The country is just south of the Equator and is bordered by Uganda, Tanzania, Burundi and the Democratic Republic of the Congo. This part of the African continent is known as the Great Lakes region, and it is characterized by having many lakes, as well as mountains and forests. The majority of Rwanda is at elevation, so the air is dry and cool. The mountains in Rwanda can be found in the Western part of the country, while savanna is found in the East. All of this with numerous lakes scattered across the entire length and width of the nation. The average climate in the country is considered temperate to subtropical, with two rainy seasons and two dry seasons each year. With its small size and relatively large population, Rwanda is one of the most densely populated countries in this part of the continent. Luckily, once you leave the main settlements and head into the mountains in search of gorillas, you leave the crowds behind. All modern Rwandans are descended from one same cultural and linguistic group, the Banyarwanda. However, in this group there are three subgroups: the Hutu, Tutsi and Twa. The Hutu and Tutsi are mentioned in the tragic events of 1994, but the Twa are often overlooked. This is because the Twa represent only a small fraction of the country’s population. They area forest-dwelling pygmy people that some consider to be the direct descendants of Rwanda's original inhabitants. The main language spoken by people in their homes in Rwanda is Kinyarwanda, with English and French serving as the country’s official languages. French is spoken by the older generation, as it is a legacy handed down from colonial times when the French and Belgians considered Rwanda as their colony. Before 2008, schools and classes across Rwanda were administered in French. Then one day, the government declared English the country’s official language in schools. It is believed this is due to English being a more international business language, as well as an effort to distance themselves from the colonial powers that contributed to the terrible events in the nation’s past. Rwanda has a presidential system of government and the president is Paul Kagame of the Rwandan Patriotic Front (RPF), who has served continuously since 2000. In 2006, Rwanda was the first country in the world to ban plastic bags and they take it seriously. Food in Rwanda is a different experience. Food preparation here takes longer than almost anywhere else on the planet, and that’s saying a lot. Even dishe as simple as beans and rice, or fried chicken, will often take an hour or two to be served after placing an order at a restaurant. Travelers say that this is seen time and again, independent of the level of the restaurant or hotel.