Get your East Africa Tourist e-Visa now for Kenya, Uganda, and Rwanda

How to Apply: East Africa Visa

An East Africa Tourist Visa is valid for Multiple Entry within the three countries, and is valid for 90 days Per Entry.

What is a Passenger Locator Form?
The Passenger Locator Form will be used to verify if you’ve had any Covid-19 symptoms. In addition, the Government of Rwanda will use this info to contact you, if you or someone you have been in contact with while traveling to Rwanda develops symptoms of the coronavirus (COVID-19). Please don’t forget that this document must be presented to the immigration officers once you arrive at the airport.

What do I need to apply for a East Africa via Rwanda e-Visa?

What is the cost to obtain an East Africa via Rwanda e-Visa?

The costs will vary according to the processing time that you choose. These are the three alternatives we have for you:

Note: The prices mentioned above are the cost of the East Africa Visa. If you wish to add the Passenger Locator Form, you just need to add the amount of $ 9.95 in each processing time.

When should I apply for the Passenger Locator Form?
This online form can only be submitted within 120 hours before your departure.

If I plan to travel with my children do they need to get a Passenger Locator Form?

Each passenger must complete an individual form. Individuals under the age of 16 traveling with a guardian/parent may not need to complete their own form as long as:

How long is the East Africa via Rwanda e-Visa valid for?
It is valid for 90 days after arrival.

How long can I stay in East Africa with an e-Visa?
The maximum stay allowed is 90 days Per Entry.

Does my point of entry have to be Rwanda for the East Africa Visa?
YES, your initial destination has to be Rwanda.

I made a mistake on my application. Can I modify the e-Visa after it’s issued?
No, we can not change or modify any details on the e-Visa once it's issued. If you do, however, realize you made a mistake before your visa has been issued, then please contact us ASAP via online chat or by sending an email to help@ivisa.com.

What requirements should my passport meet if I want to apply for a East Africa via Rwanda e-Visa?
Your passport has to be valid for at least 6 months after your e-Visa expires.

Can I enter through any port of entry with an East Africa via Rwanda eVisa?

Foreign citizens who have received a Tourist e-Visa in the Electronic visa system need to enter through the following checkpoints:

How many entries may I allow to use this Passenger Locator Form?
This document can only be used for a Single Entry to the country of Rwanda.

Can I extend the validity period of the e-Visa?
NO, East Africa Tourist e-Visa shall not be extended.

Am I allowed to visit other countries besides Uganda, Kenya and Rwanda on this visa?
NO, it is limited to those 3 countries.

Where can I check more info?
You can read extra information about Rwanda eVisa and Passenger Locator Form here.

If I have more doubts, where can I contact you?
If you still have questions, you can contact our super agents at any time or send us an email at help@ivisa.com.

Vaccination requirements to travel to Rwanda 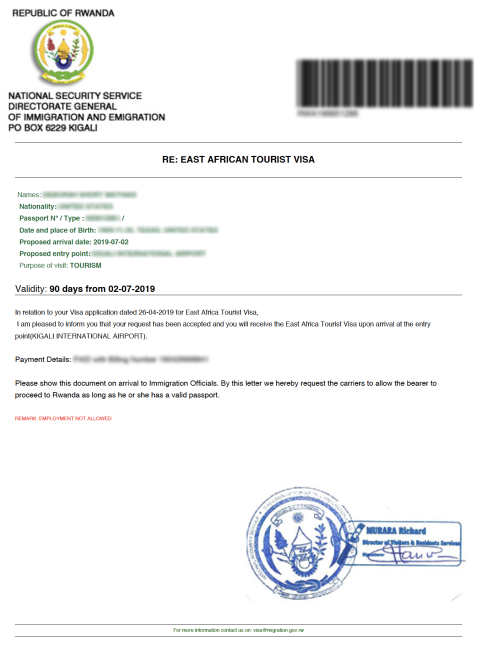 East Africa may be a region, but it is also an intergovernmental organization which consists of six countries. They are Burundi, Kenya, Rwanda, South Sudan, Tanzania, and Uganda. Many people who choose to visit one of these countries also like to take a tour of some of the others. It is easy to see why. These beautiful African gems have many experiences to offer, and you will have the time of your life when you go there. Plenty of nature’s wonders await, but you will find that you can have a lot of fun as well. You will interact with different people and cultures that will enrich your life.

First things first, we should discuss visas. All the countries mentioned above require some kind of document that allows you to cross the borders. However, you should know that for Kenya, Rwanda, and Uganda, you can apply for a single document. It is called an East Africa Visa. iVisa can help you get it in just 48 hours. It allows multiple entries and has a validity of 90 days.

Now, you have to be careful about one thing, and that is the initial country you visit. You can apply for an East Africa visa via Rwanda, Via Kenya, or via Uganda. Why is that important? Because the document will be issued by the proper authority of the country you wish to visit first. Also, keep in mind that while the East African Community consists of six states, you can only visit three of the using the East Africa Visa (Kenya, Rwanda, and Uganda).

Traveling to all these countries can be as challenging as it can be amazing. However, there are a few things you should probably know before you accept the challenge. For one thing, you should not plan your trip to take place during the rainy season. In Rwanda, that happens March through May, and October through mid-December. In Kenya, it happens in April to June, and a little bit in November and December. Uganda’s rainy season occurs in March through May and October through November, and Tanzania’s is it the same. In Burundi, the rainy season is in February to May, and September through November. The reason why you should avoid the wet season is that you will have a terrible time. You will always be wet, and let’s not forget about the dangers this season imposes. It may be cheaper in the rainy season, but it is not worth it.

The main reason most people choose to explore the East Africa region is that it hides some of the most beautiful gems in Africa. The Serengeti National Park alone makes the trip worth your while. You may have heard about a little thing called the Great Migration. Truth be told, it is not that little, and it cannot be called a thing. It is a phenomenon, a magical event in which hundreds of thousands of animals migrate in search of food, water, and a safe place to breed. Thousands of animals die on their way to greener pastures, either swallowed by high waters or killed by hungry predators. Nature’s show is magical, but it is just as brutal. People pay thousands of dollars to bear witness to this event, which takes place each year-round but in different places. After all, this is a migration. It always moves.

Another thing you should know is that wildlife and safaris are not the only activities that are worth your while. Of course, most people choose to see the mountain gorillas in Rwanda, see the migration in the Serengeti, or spending days on end on a beach in Zanzibar. You should also go for some things that people do not crowd to do. For example, you can go Kayaking on the shores of Lake Kivu in Rwanda, explore the ancient ruins in Kenya, or even accept the challenge of going for a swim with whale sharks in Tanzania. You will see that there are fewer people crowding the areas which will make your experience much more pleasurable.

One of the things you will enjoy while exploring East Africa is the endless opportunities of taking astonishing photographs. The sights are to die for. Breathtaking. However, there is one thing you should be aware of. People do not like to be photographed on the streets. It is true that some of them wear bright colored clothes that will want to make you pull out the camera. But it is disrespectful not to ask for permission. After all, how would you like if people kept coming into your neighborhood and took photos of you? Or of your children? Constantly? Not too much, surely.

Before traveling to East Africa, people do not have high expectations when it comes to cuisine. And that is a mistake. Think about the EAC (East African Community) as a melting pot of different traditions and cultures. Food is a big part of that. You will find western cuisines, as well as local meals that will make your mouth water in an instant. Arabic food is one of the favorites because it is rich in spices, but the other local cuisines do not fail to impress either. Take it all in before your return. You will not regret it.

One of the most important things you need to remember is to not make assumptions before you leave for East Africa. Media portrays Africa as this dry, poor land, where not even grass grows, and people die of hunger. While that indeed happens in some regions, it is not all famine and civil war. The region is diverse, and the people are so different. Do not treat them with disrespect. Not all of them are poor or uneducated. Many of them choose to have a simple life. And they may be happier for it. The point is that judging is wrong, and before you board your flight, it is essential to leave all the common misconceptions behind. They will not serve you well on your trip.

What you need to remember from all this is that East Africa is enormous, and it gives you the opportunity to experience things you have never experienced before. It is unique, and you will feel richer and happier for taking such a trip. Take it all in, and keep in mind that some of the best gems are the hidden ones. They have the highest worth.