Get Your Saint Kitts and Nevis e-Visa Online Now

DOCUMENT OVERVIEW
The Saint Kitts and Nevis e-Visa is an online form that eligible travelers must acquire in order to enter this beautiful country. Apply for your e-Visa today.

WHO CAN ENTER SAINT KITTS AND NEVIS WITH THIS DOCUMENT
The authorities in Saint Kitts and Nevis issue tourist visas to visitors from 73 countries. Simply fill out the online application to get yours.

DISPLAY THE DOCUMENT
Print out a hard copy of the Saint Kitts and Nevis e-Visa, and keep an electronic copy on a handheld device for ease of access when the authorities request to see it at the airport.

Do I need a COVID vaccine or vaccination certificate to enter Saint Kitts and Nevis?

No, you don't. As of today, COVID vaccination passports or certificates are not mandatory to enter Saint Kitts and Nevis. Since information may change quickly, we advise you to follow up on the latest Saint Kitts and Nevis travel updates and/or contact your local embassy.

Do I need to take a PCR COVID-19 Test before traveling to St. Kitts & Nevis?

Do I have to quarantine when I get to St. Kitts & Nevis?

What is the cost to obtain a Saint Kitts and Nevis eVisa?

The Saint Kitts and Nevis Tourist Visa is free. Additionally, there is a service fee of:

How long does it take to process a Saint Kitts and Nevis eVisa?

How long is a Saint Kitts and Nevis eVisa valid for?

How long can I stay in Saint Kitts and Nevis with an eVisa?

Is there a visa for St Kitts?

Yes, certain nationalities will require a visa for short visits and tourism purposes unless the country holds visa-free entry. With a Saint Kitts visa, citizens may stay for 30 days Per Entry.

What is a Saint Kitts and Nevis eVisa?

What do I need to apply for a Saint Kitts and Nevis eVisa?

How many entries are allowed under a Saint Kitts and Nevis eVisa?

The Saint Kitts and Nevis eVisa allows for a single entry after 30 days of issued. However if you will stay over 30 days, it’s possible only if you apply for a eVisa with multiple entries.

Which countries can apply for a Saint Kitts and Nevis eVisa?

What should I present upon arrival?

You must print the approval and pay a 100 USD fee to the Immigration Officer to get the Visa on Arrival. 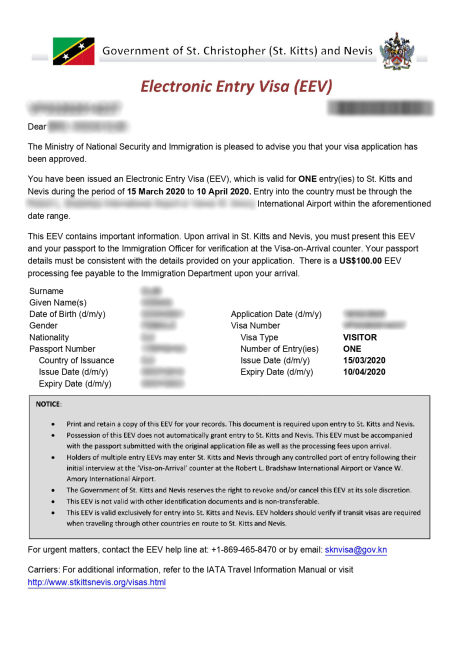 Saint Kitts and Nevis is beautiful two-island nation located in the eastern Caribbean Sea. If you were to draw a straight line between Puerto Rico and Trinidad and Tobago, Saint Kitts and Nevis would lie roughly one third of the way down the line. These two islands are actually the summits of a volcanic mountain range, with the rest of the range hidden underwater. Nevis is the slightly smaller island and it lies just two and a half miles away from Saint Kitts. Nevis has its own volcano, and from Saint Kitts travelers will usually see the Nevis peak hidden up in the clouds, surrounded by the island’s dense greenery and beautiful white sandy beaches. For the intrepid traveler, these wonderful pair of islands has something to please everyone. For couples, Saint Kitts is the perfect romantic destination, while for families there is something to keep every family member happy. There is also a thriving food scene, sure to make even the most demanding foodie excited, and due to the influx of cruise ship tourists, there are luxury options aplenty too. The locals on Saint Kitts and Nevis are some of the friendliest and most authentic you will find anywhere in the Caribbean. To get a feel for what day-to-day life is like for locals, visitors should make a note to visit the busy Saturday market to find out where the locals do their shopping. One of the best local products to buy in Saint Kitts and Nevis is the local chili sauce. But beware, it’s not for the faint of heart. The stalls on Bay Road around the market and are a great source of street food and local banter. Most visitors come to these islands primarily to enjoy the sun and sand. And with good reason, the beaches here are truly world-class. However, once you’ve had your fill of palm-fringed idyllic beaches, there are many things to do on the island covering a whole range of interests. Also, if you happen to be one of those who are arriving on St Kitts by cruise ship, there are plenty of activities to do in a day. Other than going to the beach, one of the most recommended things to do in St Kitts is take a ride on the Sugar Train. It might well be the most scenic railway route in the entire Caribbean and should not be missed. The train line was built between 1912 and 1926 and was originally used to transport sugar cane from the fields to the mills. Nowadays its sole purpose is to take paying passengers through the stunning Saint Kitts countryside. The train has been refurbished for this sight-seeing purpose and is now double decked with open observations carts. The ride allows passengers breathtaking views of the dormant volcano, Mount Liamuiga, as well as many views of the lush rainforest and across St Kitts and the surrounding islands. The price of the train ticket include all drinks, and rum punch or daiquiri is the recommended cocktail. The last time Mount Liamuiga, the island’s dormant volcano, erupted was over 200 years ago. For the adventure seeking traveler it is possible to walk the three hour-long hike in order to be rewarded with epic views over the island and a peep into the crater which is often referred to as the “Giant’s Salad Bowl”, due to the foliage that fills it.

The temperature in St Kitts and Nevis doesn’t not vary too much throughout the year, as it it tempered by the sea. It generally ranges from around 25°C in January to 28°C between June and October and is almost always humid. The cool and dry season generally runs from January until April, while the rainy season goes from May until November. The weather in December is anyone’s guess Also, for those curious about the temperature of the ocean, the water temperatures rarely go below 26°C, no matter the time of year. This country is also no stranger to festivals, with the biggest and best being the St Kitts Music Festival in June of each year. The event attracts international stars and festival goers at the island’s Warner Park Stadium are treated to the sounds of soca, reggae, soul, salsa, jazz, R&B and gospel. There is also a Lating Festival held in October of each year and in July the country hosts an annual food and restaurant festival.