Start your application
A visa is required. We can assist in processing this document.
iVisa.com provides expedited processing and guidance for any visa application since 2013. We are not affiliated with any Government Department.
────

How to Apply: Tourist eVisa

As of April 2018, passport holders of 52 specified countries may apply for Ukraine’s electronic visa (e-Visa). E-Visas are issued by the MFA of Ukraine as single entry Tourist or Business Visas and are valid for up to 30 days after arrival. The e-Visa system is an online method of applying for visas for entry from anywhere in the world. Some advantages of this system to the traveler are that visas can be applied for quickly over the Internet at any time, from any location, and payment is made online at the time of the visa application. Travelers will receive the Ukraine e-Visa via email. We recommend printing the e-Visa as you must show the document upon entry and have it with you for the duration of your stay.

Use our Visa Calculator Tool

Our customers have great stories about us

What is the Ukrainian Tourist e-Visa?

The Ukrainian Tourist e-Visa is the official travel document needed by foreigners for tourist purposes to visit Ukraine.

What do I need to apply for a Ukraine Tourist e-Visa?

What is the cost to obtain a Ukraine Tourist e-Visa?

How long does it take to get my Ukraine Tourist e-Visa?

How long is the Ukraine Tourist e-Visa valid for?

It is valid for 30 days after arrival. Note that this is different from most visas, which become valid on the date they’re issued.

How long should my passport be valid for if I want to apply for a Ukraine Tourist e-Visa?

Applicant’s passport should have at least 6-months validity from the time of entry into Ukraine and at least one blank page.

I made a mistake on my application. Can I modify the e-Visa after it’s issued?

No, we can not change or modify any details on the e-Visa once it's issued. If you do, however, realize you made a mistake before your visa has been issued, then please contact us ASAP via online chat or by sending an email to help@ivisa.com.

What nationalities can apply for the Ukraine tourist e-Visa?

What documents do I need to present upon arrival at Ukraine?

You will need to show the following documentation:

How long can I stay in Ukraine with an e-Visa?

The maximum stay allowed is 30 days Per Entry.

Does the e-Visa guarantee me entry into Ukraine?

A visa (e-Visa or otherwise) only grants you permission to travel to an entry point (airport). The final decision on granting entry will be at the discretion of the Immigration Officer at the point of entry.

Vaccination requirements to travel to Ukraine 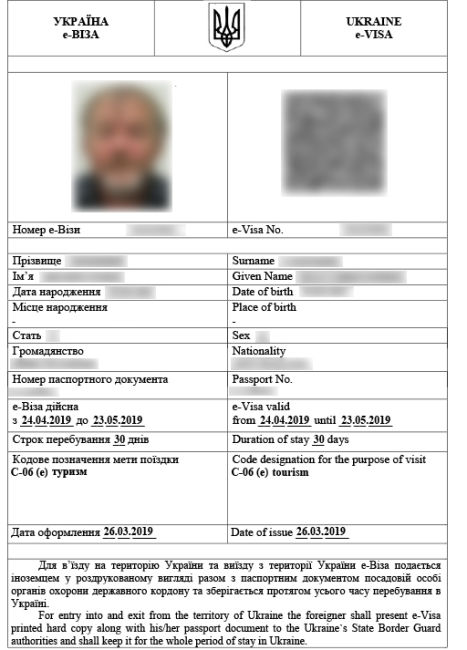 Where can I read more?
What is an eVisa

An e-Visa is an official document permitting entry into and travel within a certain country. The e-Visa is an alternative to visas issued at the ports of entry or visiting an embassy/consulate to obtain traditional paper visas. e-Visas are linked electronically to the traveler's passport.

How do I know when I need a visa?

Our service starts with information. You can use our up-to-date visa requirements tool to search if you need a travel visa. It's as simple as telling us where you are from and where you are going. Based on this information we will tell you how much the visa costs, the number of entries, the start date and give you an action step such as applying directly on our site!

How long is my visa valid for and how much does it cost?

The best place to find this information is our visa requirement tool. Each country has different entry rules and visa fees. If you are in a rush you can also apply online and the form will give you this information as well.

Once I apply, when I will receive my visa?

It depends on the country issuing the visa. For many countries such as Australia ETA and Turkey e-Visa, the process can be done in 15 minutes through our rush service. For other countries such as the India tourist Visa, the process usually takes 24 hours. The exact time can be found on each application form. What we guarantee is that your application with iVisa will be the fastest way to apply anywhere.

What are the specifications for printing the e-Visa?

The documents must be printed on a sheet of blank A4 white paper. Double-side or reduced printing will not be accepted.

We help you get your travel visa in the simplest and fastest way possible. Through easy-to-use online application forms and world-class 24/7 customer service, we make the whole visa process quick and simple! We also use best practices when it comes to protecting your data and credit card.

What kind of visas does iVisa process?

How do I apply?
Why does iVisa charge a service fee?

Please note most countries offer the ability to process a travel visa without a service fee. The main reason we process thousands of travel visas per month is we save you time and frustration. Our service includes an easy to use website and application form. It is much easier to process your application with us especially for mobile users and large groups. We send all of our clients the visa days before travel. This is especially helpful for those passengers who purchase the visa months in advance. We also have a 24-hour customer service with professionals that are based in the United States and speak English. We accept multi-currencies and our website can be translated into over 20 languages. We believe our fee is worth your time and sanity but please note all governments do have their own "free" service.

Where can I check the status of my visa application?

If you have already applied on our site, please log in to your account and look for your order/application. An account is generated for you automatically after payment is received. Click the link in your confirmation email to set up a password or visit the log in page to set up the password and enter the account. Please note in most cases your visa will be delivered to you via email and can be found in your account after logging in.

If my visa is rejected, do I receive a refund?

In the rare instance where your visa application is rejected, you will receive a full refund under our 100% approval guarantee. If for any reason, you are not satisfied with our service please contact us and we will provide a refund of your service fee. If we make a mistake on your application, a 100% refund will be issued and we will process your visa again at no cost.

I made a mistake on my personal information when processing the visa. Can I modify the form?

If we have not processed your visa, we can make changes without a problem. We do check your information for mistakes as well. If you have already processed your visa, If we have submitted your application to the appropriate government agencies, some will allow to make changes, while others do not. Please contact us immediately (preferably through chat) if you notice an error on your application.

Do I require a vaccine when traveling abroad?

Some countries may require proof of yellow fever vaccination if you are arriving from a country with risk of yellow fever. You can see more info here: https://wwwnc.cdc.gov/travel/destinations/list It's the passenger´s own responsibility to verify these regulations before traveling to the chosen country.

How can I get an invoice for my order?

What should I do if my e-Visa is lost, defaced or damaged?

Is my credit card information safe?

Yes. The iVisa system does not retain your credit card information after the transaction is processed.

If approved, does this guarantee my admission to the country I am applying for?

All visas grant travelers the permission to travel to a country's port of entry. Whether you are granted entry or not will be at the discretion of the Immigration Officer at the entry point.

If i want to cancel my application, what is your refund policy?

Does the processing times for a visa include shipping times?

When the visa has to be shipped to you, the processing times do not include this shipping time. It is from when we receive your application to obtaining the approval. Most visas (e-Visas) are sent via email upon approval so shipping times will not apply.

Are you affiliated with any of the governments that you process visas for?

No, we are not affiliated with any government agencies. We are a private company that specializes in processing travel visas for travelers worldwide.

If my visa is not approved, can you tell me the reason?

Unfortunately, we are not able to, since the government agencies do not inform us of the reason(s) behind the decisions.

If my visa is not approved, what are my options?

If your visa is not approved, we advise that you contact the nearest embassy/consulate for more information on what your options are.

What forms of payment to you accept?

What happens if I'm applying from an overseas territory or a dependency from another country?

All citizens from these territories applying through our website will have their application processed with the nationality/citizenship specified in their passport. As an example, a traveler from Puerto Rico will have their request processed as USA nationality. This does not apply to the travelers under the BOTC (British Overseas Territories Citizen) category according to the British Overseas Territories Act of 2002.