Get your Australian ETA Visa Online Now (Also Referred to as an e-Visa)!

The ETA system was introduced in 1996, providing authorization to travel to Australia and is electronically linked to your passport. While checking in at the airport for your Australian-bound flight, the check-in staff can electronically confirm that you have the authority to board the flight to Australia. The Australian ETA is available to citizens of over 50 countries.

The ETA is an electronically-stored authority for travel to Australia for short-term tourist or business visits and for applicants outside Australia. It replaces the visa label or stamp in a passport and reduces the need for travelers to visit an Australian Embassy. The Australian ETA allows the holder to travel to Australia as many times as required within the validity period of 1 year after issued. The maximum length of each visit is 90 days Per Entry

What is an ETA visa?
The ETA (Electronic Travel Authority) is not a full visa but rather an Electronic Authorization available to certain nationalities. The ETA is an entry requirement by those applicable nationalities traveling into the country for purposes of tourism.

What is an Australian ETA?
An Australian ETA (Electronic Travel Authority) provides authorization to travel to and enter Australia, and is electronically linked to your passport. It is for short-term stays for tourism or business visitor activities such as attending a conference, making business inquiries or for contractual negotiations.

What do I need to apply for an Australian ETA?

How long does it take to obtain an Australian ETA?
It depends on the method of processing time you choose. We offer three options:

How long is an ETA valid for?
The ETA visa is valid through to the expiry date listed within it, which is the last day you have the authority to enter Australia. This expiration date of the Australian ETA will be either 1 year after issued, the expiration of your passport, or earlier if a current visa already exists in the immigration system. For example, if your ETA approval is on June 2018, but your passport expiration is in February 2019, your ETA will expire on the same date of your passport; otherwise it will expire in June 2019.

What conditions must the applicant’s passport meet for an ETA?
You must have a regular valid passport (not expired) and a valid visa when you board your flight and when you enter Australia.

How does the Australian ETA work?
The Australian ETA allows the holder to travel to Australia as many times as desired, within the validity period which is 1 year after issued. The maximum length of each visit is 90 days Per Entry. Your ETA visa is electronically linked to your passport number. There is no stamp or label in your passport.

Is my ETA valid for multiple entries?
Yes, the ETA offers Multiple Entry. However, your maximum stay is 90 days Per Entry

Who is eligible for an Australian ETA?
Citizens of certain countries are eligible to apply for the Australian ETA provided they meet the required criteria. Scroll to the top of the page to determine the visa requirements for your country.

I made a mistake on my application, what can I do?
Please contact us ASAP via Online Chat. Unfortunately if your visa was processed, you will need to pay an additional USD 20.00 charge.

Are there any restrictions for my ETA?
Yes, see below:

Can I apply for an ETA in Australia?
No. The Australian ETA must be obtained prior to your entry into Australia.

Do I need an ETA for my children traveling to Australia with me?
Yes. Everyone traveling MUST obtain an ETA before departing, regardless of their age. Each person needs to submit an application separately. If your child or children are linked to your passport, you still need to submit individual applications.

If I am only passing through Australia, do I need an ETA?
If you depart within 8 hours or arrival, hold confirmed onward booking documentation, and will remain in the transit lounge, you will not need an ETA. However, for certain nationalities, a transit visa may be required. Please go to this website for more details.

Do I need to have a flight booked before applying for the visa?
No. You do NOT need to provide a plane ticket. You can apply for your ETA before you have a confirmed ticket.

My passport is valid for less than six months. Can I still apply for an ETA?
Yes. You only need a regular valid passport (not expired) and a valid visa when you board your flight and when you enter Australia.

What if I want to enter Australia before my ETA validity period?
You must complete a new ETA application. The previous ETA application will be canceled once the new ETA is issued.

If I already possess a valid Australian ETA, can I apply for a new one?
A new ETA cannot be obtained using the same passport until that actual ETA expires. If you lose the passport which contains the actual and valid ETA you may apply for a fresh ETA by paying the relevant fee again.

How do I know if my Australian ETA is still valid for travel to Australia?
If you have applied for an ETA, you can inquire through this site to find out its current status. You will need to log in in order to make this inquiry and renew your ETA if it is necessary.

Vaccination requirements to travel to Australia 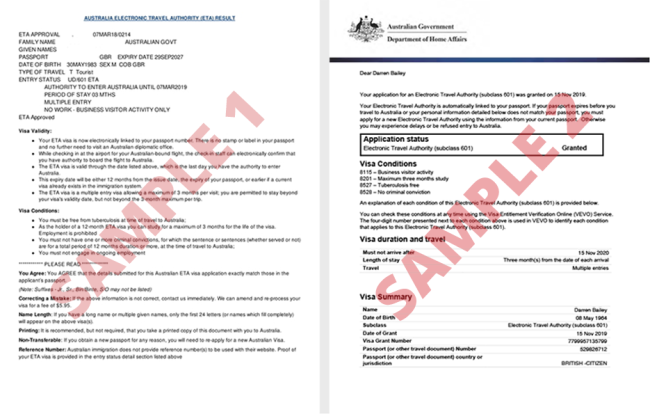