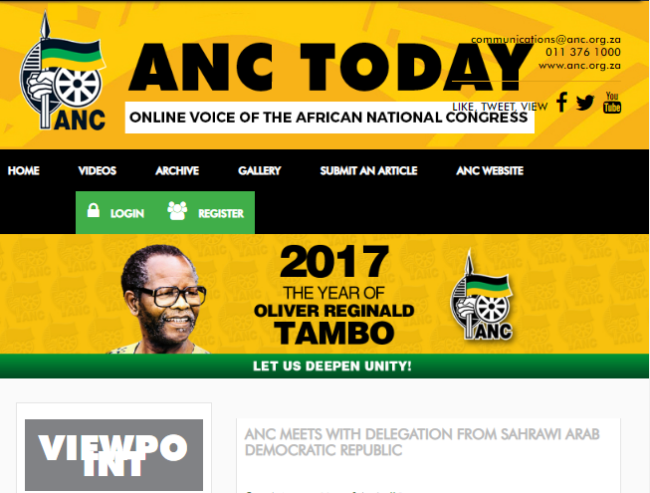 The African National Congress began this site in May 2016. The website design and website development of the ANC site was completed by Ogilvy Public Relations.

In sum, the African National Congress (ANC) is the governing political party of the Republic of South Africa and has governed South Africa ever since the election of Nelson Mandela in 1994 in post-apartheid South Africa.

The site was not the main African National Congress political party site. Instead, it was a partisan-influenced site sharing multiple viewpoints through news and personal articles about the politics of post-apartheid South Africa.

ANC Today was released in weekly volumes. They wanted to provide up-to-date information on the programs, perspectives and policies of the movement on current national and international issues. It was published every Friday and one could subscribe and have it emailed to them.

You could also register as a site member and log in from the from page.

Many articles pertaining to all aspects of ANC and South African politics were displayed on the front page also as one of the main goals of the site was accurate and diverse political reporting.

The site claims to have articles that are:

If anyone wanted to know the role of the African National Congress in national and international relations, then this site was for you.

The ANC claimed that ANC Today was the “voice of the ANC” and that they were telling their story on their own terms.

If you wanted to submit an article to ANC Today, you had to go to the Submit an Article page and complete the online form and upload any images necessary. The African National Congress encouraged outside submissions and also story pitches.

The website was up and running until at least March 2018.