As the festive period approaches, there's major buzz in the air about two things, One being Christmas and the other, Spotify Wrapped, when music lovers get to re-experience their most “memorable listening moments of the year” and share them online with other enthusiasts. 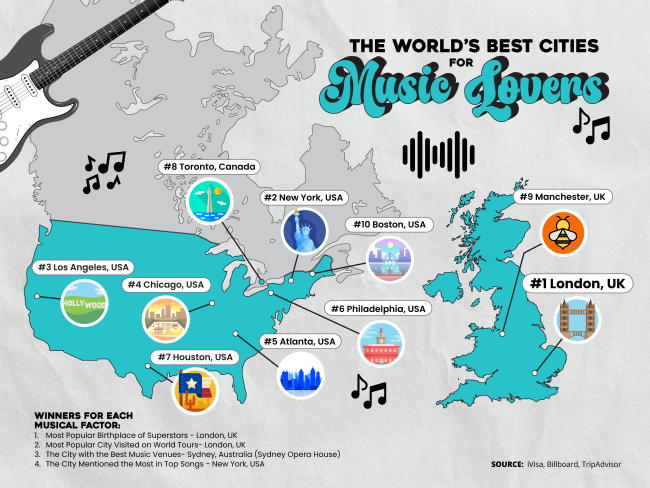 The upcoming release of Spotify wrapped and festival line up announcements have got people thinking about which of their favorite artists they'll be watching this year, and where." In fact, many popular festivals such as Glastonbury, All points east and TRNSMT are taking place throughout the UK. So what better time to combine the two - music and travel and and give you some travel inspiration for the new year

We’ve created the ultimate index of the best cities for music lovers through measuring world destinations against four musical factors - the most popular birthplace, the most popular cities visited on a world tour, the city with the best venues, and the top cities referenced in popular songs. Results proved that - London is the Ultimate city for music lovers to visit, whether that be to attend a concert or soak in the music heavy history of the city.. But if that’s a little too close to home and you want to travel a bit further afield, there are plenty of other locations that made it onto the list… 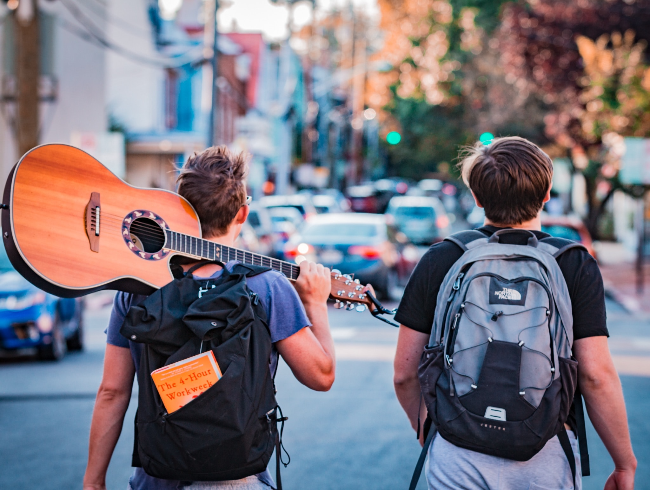 The top 10 destinations OK, here’s a round-up of the best cities for music lovers, starting with number one, the Big Smoke.

London is the UK’s capital, and aside from being a music hub, it’s famed for many other reasons, too. From the iconic architecture in the centre, including Big Ben, Buckingham Palace and Tower Bridge, to its many boroughs that possess their own individual identities and personalities, it really is a cultural melting pot. After a couple of stops on the tube, you’ll literally feel like you’re in a completely different city.

Fancy doing some celeb spotting? A trip to Hampstead could see you bump into the likes of Ricky Gervais, Helena Bonham Carter, or even Britpop legend Liam Gallagher. Or if you’re after something a bit grittier ~Camden Town~ which was once the coolest place in London is a definite must-see. While it’s no longer as cool as it was, it was the late Amy Winehouse’s playground, and there are so many references around the town to the star. Most notably her old house, 30 Camden Square, which has become a site of pilgrimage for thousands of fans.

So, how did London do for each of the musical factors?

This gave the capital an overall score of 197.

New York is one of those cities that’s on everybody’s bucket list. Whether it’s for the classic Statue of Liberty and Central Park attractions, or for more of a trendy Soho exploration vibe, the famed American city has so much to offer. And who can ignore that classic shot of the NY skyline?

Depending on how long you’re visiting, locals recommend that once you’ve seen Manhattan, you’ve got to explore the rest of NYC. After all, it’s only one-fifth of the city, and there are countless incredible places to visit in the other four boroughs. From trying out local breweries in Brooklyn to grabbing next-level Asian food in Queens, there’s also the Yankee Stadium in the Bronx.

Of course, musically, New York is home to Madison Square Garden, one of the most famous venues in the world. It’s also the birthplace of some mega stars, like Alicia Keys, Lou Reed and Barbara Streisand.

Score-wise, NY came in at a close second:

Los Angeles is the home of Hollywood - the centre of the USA’s film and TV industry. Aside from its glamorous lifestyle and that iconic sign, it’s also known for its gorgeous beaches, Med-style weather, and diverse art and culture, which makes LA just as popular to holiday there as it is to live.

Well-known attractions include walking the Hollywood Walk of Fame, catching the famed Venice Beach sunset and strolling on Santa Monica pier. Plus, it’s got a vibrant food scene that celebrates cuisines from around the world.

In terms of musicians, stars such as Billie Eilish and Doja Cat hail from the City of Angels, and venues like the Hollywood Bowl and the Troubadour have cemented themselves as legendary landmarks in the city.

On the best city for music lovers scoreboard, this is how LA did:

Los Angeles ended up with a final total of 184.

The city of Chicago is incredibly multi-faceted and known for an array of things. We’re talking Chicago-style deep-dish pizzas and hotdogs, 1920s gangsters like Al Capone, and of course it's thriving music scene. Whether you’re into jazz, hip hop, or blues, there’s something for everyone.

Famous faces like Jennifer Hudson and (of course) the band, Chicago come from the city, but it’s also home to popular festivals like the Pitchfork Music Festival and Lollapalooza.

When ranked for the four musical factors, Chicago came in strong. Here’s how the “Windy City” scored:

This is the fourth American location to make it onto the best city for music lovers list, but aside from music, Atlanta, GA has a whole load of other strings to its bow. Firstly, it’s the birthplace of Civil Rights leader Martin Luther King Jr. and is a city known for its rich history as well as the influence it has had on modern day life.

If you’re in the area, locals recommend Inman Park for its thriving beer and cocktail scene or Downtown Decatur for its independent shops and range of cuisines. Plus, there’s obviously the MLK historic site, and the Atlanta Botanical Garden that’s described as an “urban oasis.”

Musically, Atlanta is known for its fusion of different genres, namely rap, hip hop, soul and R&B, as well as live country and blues being found in many venues around the city every night.

So, how did it rank?

Which made Atlanta’s overall score a respectable 176.

Philadelphia, otherwise known as Philly, is just as famous for its Philly cheesesteak as it is for its live music scene. Welcoming an array of styles, from rap, rock, jazz and pop, the city has been showcasing some of the world's biggest bands for years in its array of eclectic venues. Plus, artists such as Jill Scott, The War on Drugs, Patti LaBelle and Eve all hail from Philadelphia.

For fans of the longest-running sitcom of all time, It’s Always Sunny in Philadelphia, there are plenty of attractions that can be visited that appear in the show, too. This includes the inspiration for Paddy’s Pub - Paddy’s Pub Old City that’s classed as one of Philadelphia's favourite neighbourhood bars.

Many will know Houston as the birthplace of Queen Bey - Beyoncé Knowles-Carter - the cultural icon. But aside from being associated with the Destiny’s Child star, the Texas city has much more to offer, both musically and otherwise. It’s been described as the most ethnically and racially diverse major city in the US and is known for its huge range of landmarks and attractions. From Market Square Park to the Space Centre Houston, plus its incredible (and award-winning) cuisines and museums, the American city is a cultural hub.

On the music scale, Houston did relatively well, coming in at just two points behind Philadelphia:

Toronto is known for its cultural and ethnic diversity and is one of Canada’s top destinations. At a glance, its famous waterfront skyline and bustling streets are an instant attraction, but Toronto’s appeal doesn’t stop there. Due to the myriad of cultures that call the city home, it makes for an eclectic music scene that drives Toronto’s success in the industry.

With major and independent labels sitting side by side, along with plenty of music festivals, venues, promoters, recording studios, and of course a wealth of talent, it’s no surprise that Toronto made it onto this list. In fact, everyone from Depeche Mode to Blink-182 has made stops in the city during their world tours.

Let’s take a look at how Toronto did in the four musical factors:

Over the years, Manchester has produced some amazing talent from all genres of the music spectrum. It inspired the Madchester movement in the 90s that gave us bands like the Happy Mondays and The Stone Roses, plus iconic venues like the Hacienda. Other legendary bands such as Oasis, The Smiths and Joy Division came out of Manchester, as well as current artists like Blossoms and The 1975.

Music aside, the northern city is a must-see for sports fans (Manchester City’s Etihad stadium offers tours of the ground), has a vibrant nightlife (choose between sophisticated bars or underground dance clubs), hosts a diverse food scene, and is the home to Media City, a purpose-built area on the Manchester Ship Canal for creative and digital businesses. From the BBC to ITV to smaller innovative organisations, it’s an exciting and forward-thinking place to be.

But if you’re coming to Manchester solely for the tunes, it’s not done badly on the scoreboard, as the city has made the top 10:

And overall, ended up with 170 points.

The 10th best city for music lovers is Boston. The state capital of Massachusetts is widely known for its hard rock and arena rock, while also combining elements of prog rock. Famous for bands like Pixies, The Cars, The Lemonheads and Aerosmith, Boston music fans will know the Theater District and Central Square in Cambridge are go-to hot spots to catch live music.

Also best known for baked beans (yep, you heard that right), the Boston Marathon, and a whole host of different neighbourhoods all exuding energy and charm, Boston is a vibrant and bustling city that is much-loved by visitors and residents alike.

In terms of how well it ranked, Boston’s overall score wasn’t far behind Manchester:

The four musical factors equalled 169, just one behind the Northern UK city.

Where else is pretty good for music? It’s not just the top 10 cities that have a special place in their hearts for music lovers, either. During our research, we found 20 other cities around the world that graded pretty highly - so much so that they claimed their spot in the top 30.

Want to find out where you can go and see your fave band after London, New York, LA, etc.? Here’s the ultimate best city for music lovers table. Get booking those gigs and get booking those flights… 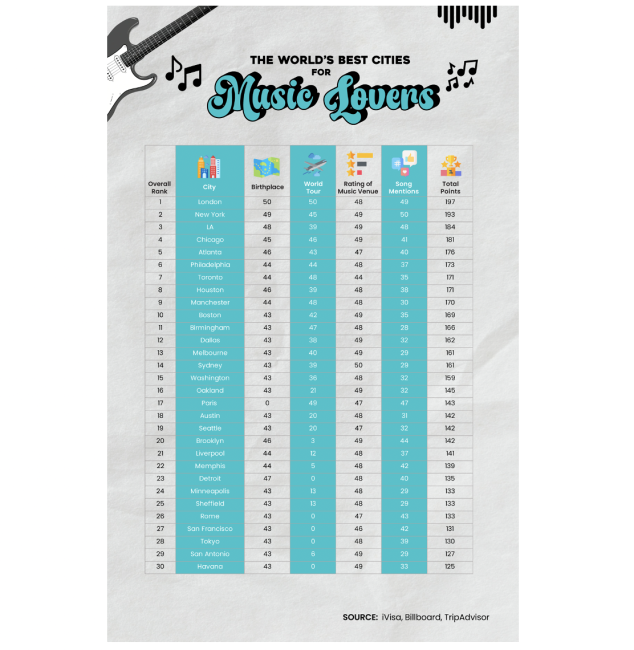 To work out the top 10 and the remaining cities that made it on the list, we followed a strict method. To start with, we looked at the top 100 billboard artists of all time. Then we researched the birthplace of each artist, which cities they visited on world tours, the rating of music venues in those cities and how many times a city was mentioned in top charting songs.

To find out the overall score, we calculated it as an average, and added each of the four factors’ scores per city, then divided it by four.

Where will you go next?

Whether you work your way down the list and catch as many artists in the cities as you can, or you get serious and follow your all-time-fave band on the road, the destinations above have been tried, tested and certified to provide the best experience for music lovers.

If you are in need of any visa information, visit our dedicated UK visa, USA visa and Canada Visa pages.