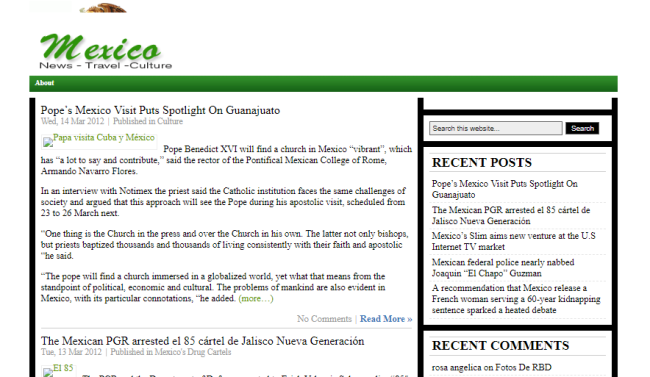 Mexico.vg started in 2006. It was powered by Mexico and Brown Pride and was a blog about Mexico travel, hotels, guides, vacations, and political news.

The main function of the site was to highlight Mexican vacation packages and travel in Mexico. They wanted to show that whether for business or leisure, people from around the world could travel to Mexico in a variety of ways with the right information. So, if you wanted information on Mexican news, travel, or culture, you could find it on this website.

There was a search function to help people search the best places to go in Mexico.

You could scroll through multiple pages, but there was not a main menu for separating the news articles. You could click on the tags they provided to find out more information about a specific section of news.

If you were looking to travel in Mexico, you could go to this site for a variety of information.

They would highlight hotels in Mexico, like the hotels in Acapulco, Mexico where they listed 5 major hotels in the area.

They also highlighted the Quinta Real in Zacatecas which a hotel but used to be a bullring where bullfighting took place.

Travel insurance was discussed about international tourists traveling to Mexico. The tourists wanted to purchase it in case of trip cancellations or medical problems. It discussed how the travel insurance industry had gained 20 percent growth from 2004 to 2006 totaling $1.3 billion in insurance from American tourists.

Some news articles that the Mexican blog highlighted was:

Mexico.vg was no longer active sometime after August 2012..