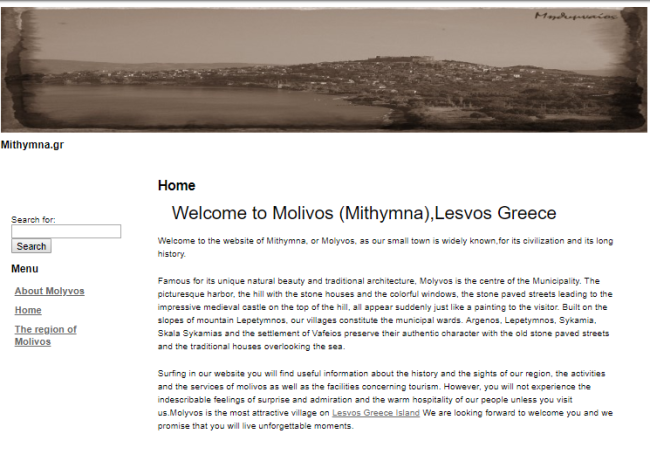 The site began in April 2003. It redirected to the MolivosNet website.

For Greek visitors, the site offered a plethora of useful travel information for anyone wanting to visit the Municipality of Mithymna which is located on the northern edge of Lesvos. It acted as a guide for tourists. As Molivos was the capital of the province, the site focused on this location, but it also offered information for the other towns located in Mithymna such as:

Sponsors included a variety of businesses in the tourism and hospitality service industry. The LESVOS Travel Guide as well as Greek.net were two of the sponsors.

Travelers to Molivos and Mithymna had easy access to a selection of local and Greek business and organization websites.

The People section explained how welcoming the citizens of Mithymna were and how much framework was in place for the hospitality and tourism sector. Mithymna citizens mainly worked in fishing, livestock farming, the tourist industry, and olive cultivation and pressing.

The Past section is a fast-paced explanation of the region’s history. This included facts about how the region was named and about the development, establishment, and political history from the Bronze Age through the Ottoman Turk Empire and beyond.

Residents of Mithymna built houses out of black stone and wood. The site discussed how the neoclassical style affected Molivos, how it became a protected city in 1965, and how the citizens work together to preserve the environment while creating prosperity for the community.

The castle of Molivos hosts theater acts and plays, musical performances and concerts, and social events on their grounds. There is also a local gallery exhibiting Greek artists as well as international artists. Visitors to the site could also find the musical history of Mithymna.

This section explains how Molivos employed Greek tourism while holding on to what makes the town unique. They boast a simple vision of life and encourage geographical and cultural preservation as a form of soft exploitation.

Hiking in Mithymna was focused on Mount Lepetymnos on the northernmost part of the island of Lesbos. The site provided information on local Greek villages near the mountain, the wildlife and ecology of the mountain, and where hiking trail information was located.

The Excursions section explained the most ideal day trips for Greek travelers. These trips were prominently booked through travel agencies. One could go horseback riding or join in on the familiar occupation of fishing with guides by local fishermen.

Eftalou was featured in the Hot Baths portion. It discussed how beautiful Eftalou was, the availability and benefit of hot springs, and the organoleptic properties of the water.

If tourists needed local and emergency contact information, they could refer to the directory of organizations listed under Useful Contacts. This included numbers for the Chamber of Commerce, the bus system, taxis, and the Greek National Tourism Association.

The site was inactive beginning in January 2017.