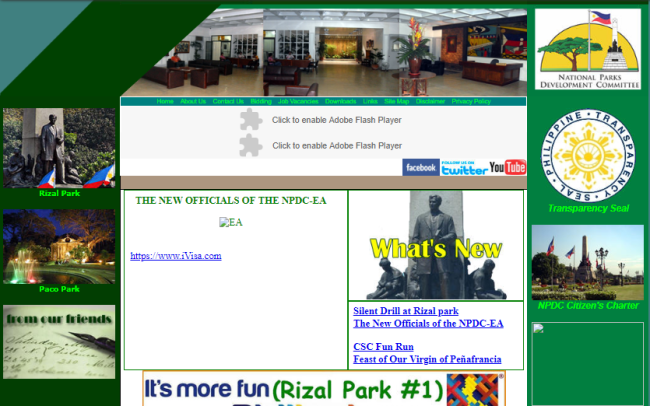 It served as the Official Site of the National Parks Development Committee of the Philippines. The committee was created in January 1963 with the mission “to provide fully developed and well-maintained parks for the Filipinos wholesome recreation and socio-cultural education which will contribute towards the enrichment of national identity and heritage.”

The parks they maintained and developed were Rizal, Paco, Pook Ni Maria Makiling Parks and the Parkways.

National Parks in the Philippines

The About Us page listed the mission statement along with how many people worked in each separate office within the Philippines’ National Parks Development Committee.

It also discussed the major goals and programs that the Committee wanted to develop and sustain such as:

There was an organizational chart so the public could note how the offices of the National Parks Development Committee of the Philippines was organized into a hierarchy.

The Development Committee invested in arts and culture that filled the parks with family-friendly events and socio-cultural activities with the hopes of strengthening families and community bonds.

The Martyrdom of Dr. Jose Rizal

This “living” memorial, created and maintained by the Parks Committee, of Rizal was a light and sound sculptural tableau honoring him and was a collaboration between three Philippines artists--Leandro Locsin, Lamberto Avellana, and Lucio San Pedro.

Dr. Jose Rizal was a political and cultural activist that gave his life to inspiring and helping the progressive youths of the Philippines fight for freedoms and reforms.

Philippines Concert at the Park

Created in the late 1970’s, the Metro Manila Symphony Orchestra brought classical music back to the center stage after being encouraged to use the Rizal Parks Open Air Theater. The concerts ended up being televised. Some contributors decided to start the Metro Manila Symphony Foundation to raise money and encourage cultural appreciation among the public citizens of the Philippines.

Every Friday night, there is a music concert at Paco Park in the Philippines. The National Parks Development Committee continues to run this as an “exchange program” of sorts between the Filipino and German peoples by promoting artists from both the Philippines and Germany. Thousands of these intimate concerts have been held.

The Business Affairs section had a parking permit sub-page.

Rizal Park and Paco Park had rentable facilities. Filipino citizens who wanted to rent out the facilities had to fill out a form, pay a non-refundable reservation fee, and then wait for approval up to five days.

Also, if you wanted to run a concessions stand or other vendor stand at one of the parks, you could go to the Concession Privileges page and fill out the form.

There was also a complete section on the development and maintenance of the parks that discussed the manpower and equipment used and the programs and activities offered.