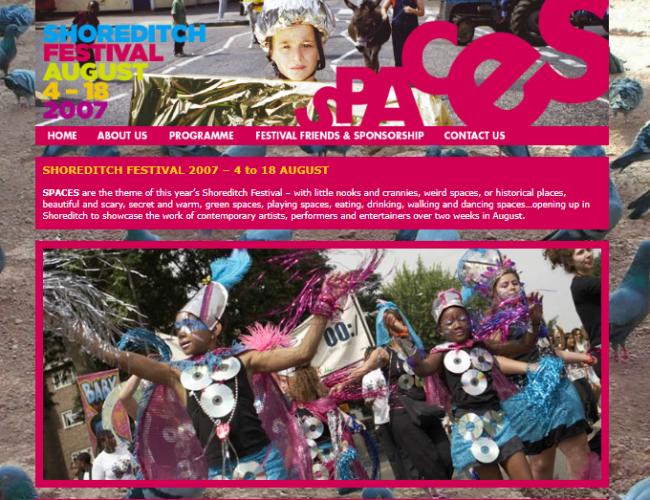 The website was created in June 2004 to display information about the Shoreditch Festival led by Shoreditch Our Way (ShOW).

ShOW is an initiative by the central government of London that focuses on revitalization of extremely impoverished areas of London. They mainly worked on projects associated with housing, health, education, employment and community safety.

The Shoreditch Festival, then, stemmed from this initiative to promote local artists and vendors to participate in the revitalization of these areas and to build community. They wanted citizens to envelop civic pride in their community, to promote a stronger local identity, and to help end social isolation by addressing the issues through art and interactive events like the Festival.

The Festival was managed by Joule, an event management company, and ShOW.

Each festival had a theme. The theme for 2004 was “dreams and memories.” The theme was supposed to promote intergenerational understanding and culture interrelevancy between both long-time citizens and new citizens that may not have as many memories of certain parts of London.

The News section contained updates about the festival such as ad space, a call for artists and submissions and contact information for coordinating with the event planners.

For those that sought to sponsor the Shoreditch Festival, one could go to the Marketing page. The main five local agencies that sponsored the event were:

Direct Image also provided all of the 20,000 brochures distributed to local residents and businesses. Those wanting to sponsor the Festival could contact the coordinators with the contact information on this page.

The programme included the inaugural parade that was held each year as part of the Shoreditch Festival.

There was usually a lineup of English musicians and English bands as well as other European bands. In 2007, some of the featured bands were:

Other various activities were involved in the Shoreditch Festival such as art, architecture, and religious walks and tours, theater performances, and art commission displays. For children, there was a lot to do in the Hoxton Community Gardens like picnicking with teddy bears and a clown. You could also participate in kid-themed arts and crafts workshops. There was also an ice cream vendor on-site.

The Festival usually ended with a free “prom” in Haggerston Park. The Royal Philharmonic Orchestra would play in the open air for a concert that was interactive.