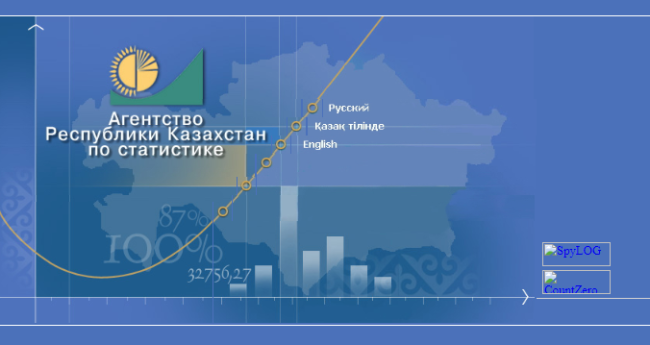 In May 2005, The Agency of Statistics of the Republic of Kazakhstan opened the domain.

Evolving since the first official statistical body was created in 1920, the then-current Agency of Statistics had three main objectives:

The functions of the Agency varied from oversight of data to ethical and privacy policing of official government data to implementation of research to gather data to providing reports to official bodies as well as the public on findings through data sets.

Statistical news was featured on the website to engage the public.

The Legislative Framework provided information on how the Agency was ran, how it was founded, and about any legal components of the founding of the Agency.

Real-Time Statistical Information provided current statistics on the latest projects, press release archives to show all the times the Agency of Statistics was featured in the media, press conference material, and market survey information for past and current data from the Agency’s surveys they gave to the public.

Analytical Materials used by the Agency of Statistics & the Center for Economic Studies and Analysis were available.

The Timeline of Socioeconomic Development in Kazakhstan enabled users to see a quick, pointed history of how data shows socioeconomic trends through time.

Classifications included the different classes associated with the statistical data used and researched by the Agency. For transparency and consideration, the Agency produced their methodology to ensure bias was as removed from data reporting as much as possible.

The 2009 Population Census featured statistical information on the census for the Republic of Kazakhstan from 2009. The 2006-2007 Agricultural Census provided insights into the agriculture of Kazakhstan.

The Questions and Answers section was a page dedicated to answering the most frequently asked questions by the public as well as more unique questions pertaining to official statistical data in Kazakhstan.

For quick reference, the site listed other organizations and government bodies to visitors:

The domain officially closed in 2015 as the site migrated to www.stat.gov.kz.