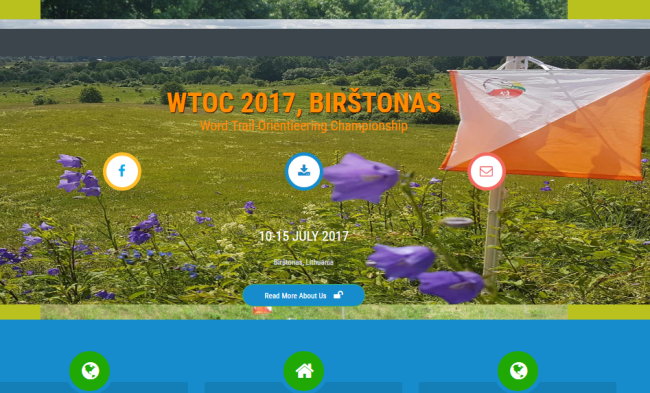 The WTOC 2017 site was created for the World Trail Orienteering Championship (WTOC) for the year 2017. It was held in Birstonas, Lithuania. Birstonas is a balneological resort and spa town in Lithuania and sits on the right bank of the Nemunas River. WTOC 2017 was held from July 10 to July 15, 2017.

Orienteering is an international sport dedicated to testing the navigational skills of participants as they make their way across rough terrains finding checkpoints. The winner is the one with the lowest lapsed time during the entire event.

The World Trail Orienteering Championships in Lithuania was held in various locations around Birstonas with the longest distance to one of the relay points being 63 km.

The event was organized by members of the “Falco” Orienteering Club which falls under the auspices of the Lithuania Orienteering Sport Federation.

The location also is known for its Birstonas mineral water. This water is used by sanatoriums for mineral water pools and baths. Birstonas is also known for its tranquility and many people go there to relax in nature. Luckily, it is not too far from larger towns in Lithuania such as Vilnius and Kaunas. So, visitors can run there and find many other things to do and historical spots to see when they tire of nature’s wonders in Birstonas.

One could find information and news about the event and relay results on the main page.

Suggested accommodations for participants and onlookers included the Royal Spa Residence 4. The goal was to have as many participants as close as possible to create an Olympic Team feel to garner spirit for the race. The recommended hotel offered both economy and superior or first-class suites and rooms. People with disabilities could access the hotel, the location both on its own and in relation to the event was ideal, and free car parking was accessible.

Anyone who didn’t want to participate as a competitor in the WTOC 2017 in Lithuania could consider becoming a volunteer and fill out an application online.

The website had a rundown of the startlists and the results of the competition and were updated throughout the event and after to keep the public informed of winners of WTOC 2017 races and relay participants. The results of the WTOC 2017 were published on the site.

The WTOC 2017 logo featured an eagle head against a circle yellow, green, and red in honor of the Lithuania flag and had the words “WTOC 2017 BIRSTONAS” engraved inside the red portion at the bottom of the logo.