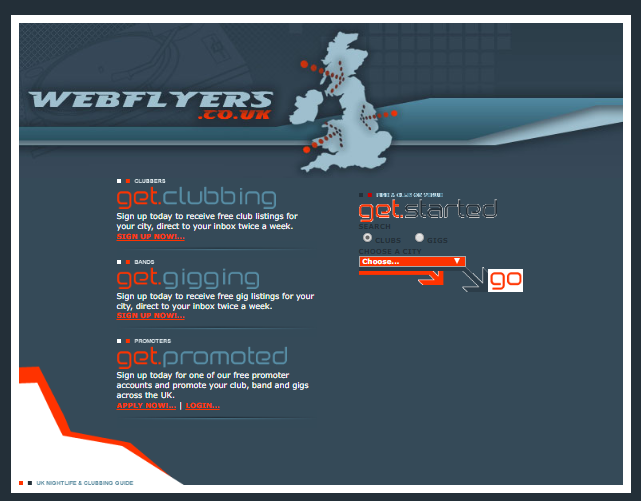 WebFlyers was a club promotion and interactive club database based in the United Kingdom that was founded in October of 1999.

This service simply required a user to enter the city in which clients wanted to receive emails for and enter their email address. After entering this information, the user was then regularly emails about club nights in their preferred city within the United Kingdom as the lists were updated, keeping users up-to-date with what was going on in the club scene in their particular area and keeping them in touch with last-minute information. The website took its clients’ privacy seriously. Their mailing list was never shared or sold to any third parties.

To use the site’s mailflyer program, the site asks its users to enter their chosen city, name, and email address.

Promoters interested in signing up with this service were allowed access to add and delete their individual listings to an exclusive Webflyers database. Users could login and update their listings whenever needed. Promoter users were also given access to the sites’ MailFlyer service that empowered them to send information about their respective club directly to the site’s mailing lists.

Once a user’s account was set-up, they were then allowed to upgrade their free listings to a priority listing for a small fee. These premium customers’ listings were then given more exposure on their respective cities’ home pages each time a user searched for a club and at the top of the sites’ Mailouts page. Webflyers.co.uk was dedicated to its users privacy concerns and only used the information that they collected about its users lawfully in accordance with the Data Protection Act of 1998. Information including users’ names, email addresses, mobile phone numbers, city and subscription options were kept private. Their mailing list was not directly shared or sold to any third parties. Advertisers, clubs, bands and promoters using the Webflyers site never had direct access to the site’s mailing list. The site included a convenient ‘Unsubscribe’ button so that users could opt-out of unwanted SPAM emails. In their respect for user privacy, the site promised to never collect sensitive information about its users and ensured the accuracy of its records and user preferences. The site also allowed users to amend and edit any information about their personal accounts by using an intuitive user interface. This website ended in 2013.