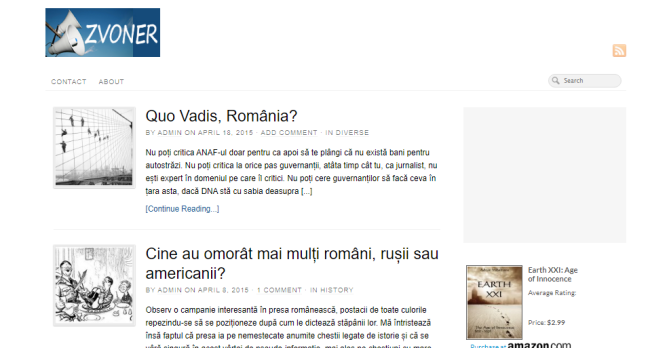 The site functions as a personal blog for an individual living in Romania. It covers the author’s opinions and predictions for the political world of Romania during the time of the authors blog posts. They focus on politics and in particular presidential politics. But the author writes on a variety of other topics, including social media, local news, personal matters, and popular culture

One topic close to the author’s heart is climate change. In one blog entry from May 2013, the author opines, “In the context of one of the hottest springs in history, in the context of two decades in which the weather has become more extreme, in the context of the drought beginning in March and ending in November, we should not even worry about it. other than the immediate costs of our future - and millions of other species - on this earth? Or at least in this country?”

The blog owner, Adrian Mihaltianu was a very creative person who wanted to express his ideas about the world but also report it in his blog. He started his Romanian blog at 30 years old.

His email address was amihaltianu@rdslink.ro and he ran under I’deea Productions S.R.L.

Some other topics he covered besides politics would be Music, photography, video, short movies, history, science, machines like cars, and culture. All of this was a personal perspective and viewpoint from a Romanian man on the views of the world.

Some of the titles included:

People were able to subscribe to the Zvoner blog by entering their email address and clicking on the Subscribe button.

Personal views of politics and the world, almost like a small newspaper, by a Romanian named Adrian.

The front page was just a short summary of many blogs in a feed format, so people could read snippets from his blog to see if they wanted to read the entirety of a specific article, or one could skip to other pages where more content was stored in a feed form.

The Zvoner logo was a rectangle that had megaphones on it to possibly symbolize letting people know about important events in Romania.