Home > Top 10 things to see and do in the Netherlands

Top 10 things to see and do in the Netherlands

Often wrongly called Holland, the Netherlands is an exciting and vibrant country in Europe. Known for its capital city Amsterdam with its canals and world-class museums, the Netherlands also boasts many tourist attractions, such as picture postcard towns and national parks, as well as fascinating cities like The Hague, home to the Dutch royal family.

The country’s small size makes it easy to visit in a few days. Experience a diverse range of things to do in the Netherlands in a short amount of time with these recommendations. 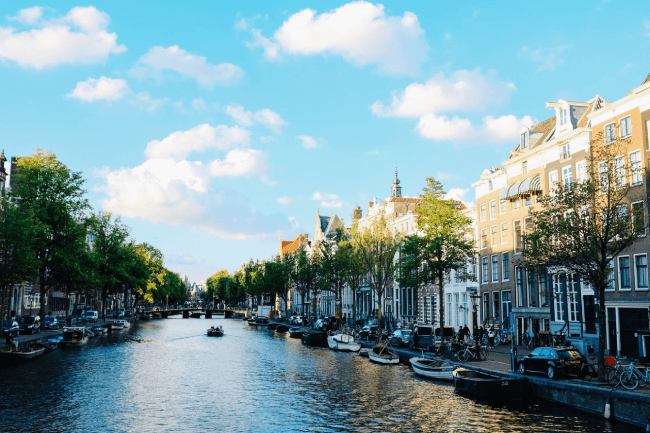 Top things to do in Netherlands

The ultimate way to experience Dutch cities and countryside is by bicycle, and fortunately most of the country is flat, so it's easy to navigate the landscape. But where to go? Below you’ll find a top 10 of the best things to do in Netherlands. If you’re looking for more practical information, for example about visas and COVID-10 regulations for the Netherlands, check out our ultimate Netherlands Travel Guide.

As with many other cities that are located on the water, the Dutch capital city of Amsterdam has a vibrant canal system. These iconic waterways are one of the most popular tourist attractions in the Netherlands, best to be explored by taking a boat tour. Exploring the Amsterdam canals is like discovering an open air museum full of architecture, bridges, and even secret pizzeria’s! From the water, you’ll pass many famous landmarks, such as the oldest zoo in the Netherlands, Artis Royal Zoo, and the Heineken Experience.

The canal system dates back to the Dutch golden age and is connected to the North Sea. For those who wonder how people live in those houseboats lining the canals, the Houseboat Museum offers a peek inside.

Tulips hold a special place in Dutch history. Tulip bulbs were imported to the Netherlands in the 16th century, from the Ottoman Empire (now Turkey). In just a few years, the flowers became one of the most sought-after commodities in the country. No wonder the Keukenhof Gardens are the pride and joy of the Dutch and one of the most famous attractions in the Netherlands among both locals and tourists.

Exploring these fields, also called the “garden of Europe”, is like walking around a natural amusement park, a magical world of color in the Dutch countryside. The best time to visit the Keukenhof is April, when the flowers are in full bloom. There are guided tours available or simply get lost in the sea of colors by yourself.

3. Wander around the Van Gogh Museum

The Netherlands is truly a heaven for art lovers. Whether you like modern art or historical works, the Netherlands offers some of the best art museums in the world. In Amsterdam, head straight for Museum Square, with the Van Gogh Museum and its vast collection of paintings by the Dutch master.

If you can't get enough, check out the Rijksmuseum, a Dutch national museum located just across from the Van Gogh museum, the Rembrandt House Museum, and the Stedelijk Art Museum with its ever-expanding modern art collection.

Giethoorn is one of the most popular destinations for travellers to visit in the Netherlands, and for good reason. This charming little hamlet is a UNESCO World Heritage Site, and can only be visited by boat or on foot, as there are no roads for cars. No wonder it’s called the “Dutch Venice”! Experience the peace, tranquility and the natural beauty of this traditional Dutch village during a boat ride or a walking tour.

5. Spend the day in The Hague

The Hague is the city where the Dutch royal family resides and where the Dutch parliament is located. As the site of some of the most famous landmarks in the Netherlands, including the International Court of Justice and Peace Palace, the city plays an important role in maintaining world peace and justice. The nearby beaches, art galleries, and the well-preserved historic center only add to the charm of the lovely Dutch city.

Only a short train trip from Amsterdam, you’ll find the small model city of Zaanse Schans nestled in the Dutch countryside. This area is an idyllic collection of historic windmills, picture perfect with extensive green fields in the background, and one of the best things to do in the Netherlands if you can’t wait to see some of these iconic structures in action.

The area reflects that of a traditional Dutch village, with wooden houses, a history museum where you’ll get a demonstration of how ancient craftsmen worked, and other historical sites to learn more about Dutch culture. Not to be missed on a short visit to the Netherlands.

7. Check out the Anne Frank museum

Seeing the Anne Frank House in Amsterdam is a must when visiting the Netherlands. The house is not Anne Frank’s house, but the place where the young Anne Frank, her family, and four others went into hiding during the second World War.

Today you can visit the Anne Frank museum, which was an office with a secret annex as a hiding place, to see how these famous historical figures lived and take a peek into Anne Frank’s diary, an aspiring writer.

One of the largest nature reserves in the Netherlands, the Hoge Veluwe National Park covers 5,400 hectares. The best time to visit is spring or summer, to explore the breathtaking natural landscape and wildlife on a walk or by free bike. Also make sure to visit the Kroller-Muller Museum, an art gallery surrounded by natural sights, housing the world's second-largest collection of Van Gogh paintings and drawings, next to the Van Gogh Museum.

The Hoge Veluwe National Park is also a great place to visit in the Netherlands for bird-watching, as it is an important bird sanctuary.

9. Take a trip to Rotterdam

The city of Rotterdam is a modern world compared to Amsterdam. This eclectic city has a hip student vibe, and boasts unique modern architecture, innovative art galleries, and interesting maritime history. The city’s history is fascinating, it was bombed in World War II, resulting in the Dutch creating new, world-class architectural landmarks. Examples of these Rotterdam Central Station, the Erasmus bridge, the market hall, and the funky cube houses. Worth a visit if you like urban cities and architecture.

Not far from Amsterdam you’ll find Volendam, an old fishing village on Lake IJsselmeer. One of the most popular sights in the Netherlands is its charming harbor, delicious fish restaurants, and traditional Dutch costumes. It is a great idea to walk around the Dijk or Doolhof to discover a labyrinth of streets, hidden churches, and wooden houses, including a bell tower, which have inspired many artists and musicians.

Inspired by all the things to do in Netherlands and the diverse range of sights and activities? Who wouldn’t be, with world-famous museums, rich history, and gorgeous countryside, there are plenty of things to do in the Netherlands for any traveler. Make sure to prepare well ahead of your trip by reading our ultimate Netherlands Travel Guide with practical info for your travels to this tiny country.

And don’t forget to obtain all the correct documents and visas, such as a Netherlands Schengen visa or ETIAS visa waiver. And if you need any help with planning your trip, iVisa is here to help.

Best places to visit in Netherlands: tips for the ultimate travel itinerary

How can citizens of the United States enter Netherlands during coronavirus?

The Netherlands, well-known for its colorful tulips, well-preserved historical places, and delicious food. It is one of the most exciting and entertai...

Traveling to the Netherlands is such an incredible experience. Now that countries have started to open borders with new health protocols, it’s relevan...

The Netherlands needs no introduction. It has been the perfect holiday destination for travelers and adventure seekers across the world. Its picturesq...

The Government of the Netherlands has made it possible for everybody within the country to have the chance to get tested in case they have covid sympt...