How to Apply: Kaliningrad eVisa

RUSSIA IS OPEN- Russia re-opened for tourism on 25 January 2021.

On July 1st, 2019, the Russian Ministry of Foreign Affairs introduced the eVisa for citizens of 53 countries. This e-Visa allows travelers to enter the Kaliningrad region for tourist and business purposes and it enables them to stay in the Kaliningrad region for up to 8 days Per Entry from the date of entry. The Kaliningrad eVisa application process is very simple and 100% online. Once the application is submitted and accepted, the applicant will receive a landing authorization that must be shown to the immigration officers upon arrival. Yes, it’s that simple.

The eVisa system is an online method of applying for visas from anywhere in the world. Some advantages of this system to the traveler are that visas can be applied for quickly over the internet at any time, from any location. Payment is made online at the time of the application.

The Kaliningrad eVisa is only available to travelers whose point of entry into Kaliningrad is one of the following:

What is the Kaliningrad e-Visa?

The Kaliningrad e-Visa is an official document that allows visitors entry into and travel within the Russian region of Kaliningrad for tourism purposes.

What do I need to apply for the Kaliningrad e-Visa?

What is the cost to obtain the Kaliningrad e-Visa?

How long does it take to process my Kaliningrad e-Visa?

How long is a Kaliningrad e-Visa valid for?

What conditions must the applicant’s passport meet for the Kaliningrad e-Visa?

Your travel document has to be valid for at least 6 months after your e-visa expires. Also, your passport should have at least one blank page for stamping.

How many entries does the Kaliningrad e-Visa allow?

The Kaliningrad e-Visa allows Single Entry of up to 8 days within a 30 day period.

When should I apply for the Kaliningrad e-Visa ?

The traveler must apply for this visa at least 5 days before the trip to Kaliningrad.

Does obtaining an e-Visa guarantee me entry into Kaliningrad?

NO. Possession of an e-Visa for Kaliningrad does not provide automatic right of entry for the holder into the Country. The Immigration Officer at the port of entry may refuse entry to any person, if he is considers that such a person is unable to fulfil the immigration requirements or that such person's presence in Kaliningrad would be contrary to national interests or security.

What do I need to present upon arrival in Kaliningrad?

Upon arrival in Kaliningrad, you need to present your passport along with your Kaliningrad e-Visa, which can be printed or shown from a smartphone.

Which countries are eligible for the Kaliningrad e-Visa?

Vaccination requirements for travel to Russia 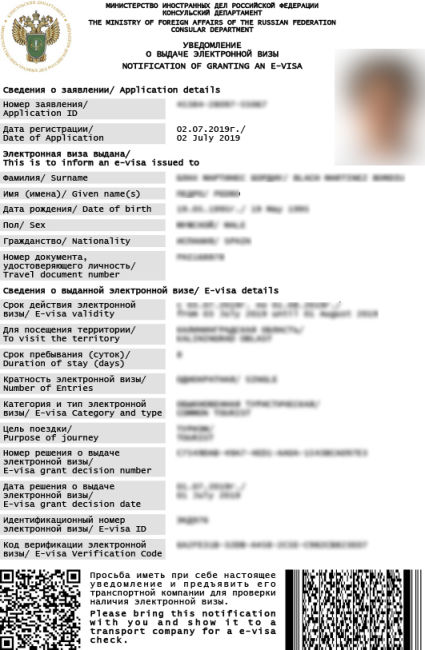