BENIN IS OPEN: Benin has fully re-opened for tourism.

DOCUMENT OVERVIEW
The Benin Tourist e-Visa is an electronic visa that allows its holder the possibility to visit and stay in Benin for up to one month or even up to three months after their arrival. All nationalities will have the opportunity to get this document, but you must clarify the reason for your visit (family, tourism, or business). It is available for both Single or Multiple Entry visas.

In addition to the Benin Tourist e-Visa, you will also have to present the Benin Health Form. It is a mandatory travel questionnaire that all visitors must fill out and it collects information about yourself and your trip. With it, the government might contact you if needed during these unprecedented times. You will have to show the associated QR Code to immigration authorities.

If you are ready to get started for your trip to Benin, apply for the Benin Health Form here.

WHO CAN ENTER BENIN WITH THESE DOCUMENTS?
Citizens of all countries will have the chance to apply for the Benin Tourist e-Visa. Citizens from all African countries can visit Benin without the Benin e-Visa for up to three months. Hong Kong citizens are exempted from a visa for two weeks only.

On the other hand, all visitors coming from abroad, whether they are national or foreigners, will have to complete the Benin Health Form and present the QR Code that it generates during their departure.

Apply for the documents here.

OBTAIN THE BENIN E-VISA AND THE BENIN HEALTH FORM
To get both the Benin e-Visa and Benin Health Form, you will have to provide data about yourself (including your full name, passport details, and contact info) and information about your trip such as your intended stay and a confirmed flight ticket.

Visit the application page to obtain the e-Visa and add on the Benin Health Form if you wish.

DISPLAY THE FORM
When you submit the application form, our fantastic team will send you an email with both your Benin e-Visa. You will have to print and show it to immigration authorities when you arrive.

If you added the Benin Health Form to your application, you will also receive it at your email address. Make sure to print it as well and show the QR Code it generates during your departure.

Visit the FAQs below to view the quarantine rules for Benin.

ABOUT COVID-19 SELF-TESTING
Don't waste vacation time searching for a COVID-19 test center. Even if you don't need to take a test to enter Benin, you will need a negative COVID-19 test result to enter the US. Simplify testing by ordering the eMed self-testing COVID-19 kit online. Pack the test in your suitcase and self-test no more than 3 days prior to your flight back to the US. Check the FAQs to learn more about our trusted testing partner.

Do I need a COVID vaccine or vaccination certificate to enter Benin?

No, you don't. COVID vaccination certificates are not mandatory to enter Benin.

Since information may change quickly, we advise you to follow up on the latest Benin travel updates and/or contact your local embassy.

Do I need to take a COVID-19 test before traveling to Benin?

Do I have to quarantine when I get to Benin?

What is the Benin e-Visa?

The Benin e-Visa is an official travel document needed by foreigners to visit Benin for tourist purposes. Apply for one today in just a few minutes.

What do I need to apply for both Benin eVisa and Benin Health Form?

We require you to provide the following information:

What is the cost to obtain the Benin e-Visa?

It depends on the length of validity and number of entries desired for your visa:

Additionally a service fee is added depending on the desired processing time:

Obtain the e-Visa to Benin now.

How long does the Benin e-Visa process take?

It depends on the processing time you choose. We offer three options to obtain your e-Visa to Benin:

How long is the Benin e-Visa valid for?

It depends on the processing time you choose. We offer three options to obtain your e-Visa to Benin:

The validity period starts upon arrival and allows applicants to stay for no longer than the time granted on your e-Visa.

What conditions must the applicant’s passport meet for the Benin e-Visa?

Your passport has to be valid for at least 6 months from the date of arrival into Benin, and have at least one blank page for stamping. Get the e-Visa now.

Which countries are eligible for the Benin e-Visa?

Citizens from all countries can apply for the Benin e-Visa, as long as their reason for travel is family, tourism, or business. Citizens from all African countries are allowed to enter Benin without a visa for stays of up to 90 days. Hong Kong citizens are exempt from visa requirements for 14 days only.

Your journey to Benin starts by applying for the e-Visa.

When should I apply for Benin e-Visa?

We recommend travellers to apply for the e-Visa at least 7 business days prior to their trip to Benin. For any application made with less than 7 days ahead of time, iVisa.com takes no responsibility for rejected visas or delayed responses.

Does obtaining an e-Visa guarantee me entry into Benin?

NO. Possession of an e-Visa for Benin does not provide automatic right of entry into the country. The Immigration Officer at the port of entry may refuse entry to any person, if they consider that a person is unable to fulfil the immigration requirements or that such person's presence in Benin would be contrary to national interests or security.

Get started on your application for the e-Visa now.

What do I need to present upon arrival in Benin?

Upon arrival in Benin, you need to present your passport along with your Benin e-Visa, which should be printed. Apply now for the Benin e-Visa. 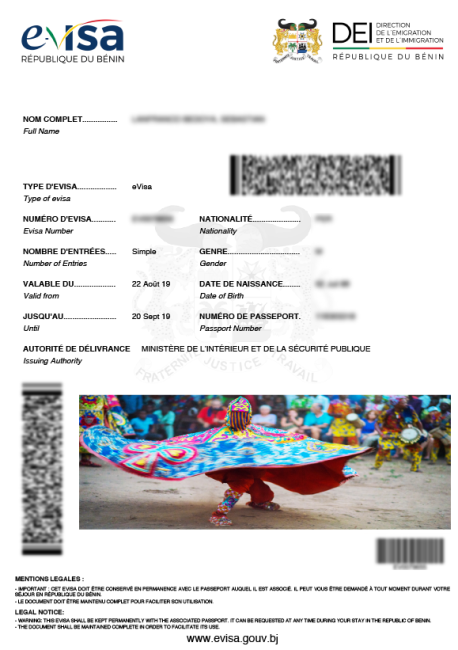 Your journey to Benin starts by applying for the e-Visa.