Best cities to visit in Croatia: which one should I not miss?

Croatia offers attractions to please different tourist profiles. The country, limited by the Adriatic Sea, host to many national parks such as the Plitvice Lakes National Park and Krka National Park, lots of sandy island beaches, and baroque churches. Even those who search for adventure can have an unforgettable experience practicing mountain biking or rock climbing.

There is no shortage of reasons to visit Croatia. You’ll be amazed by the Croatian culture, landscapes, and history. But the real question is, “What to visit in Croatia?”. With so many options, it can be hard to choose.

iVisa will give you information about the main cities in the country so you can decide which is the best option for you and get planning your trip. You can also check out the Croatia travel guide to learn more about how to prepare for a visit to Croatia, such as travel documents, weather information, and costs during the trip. Take notes and pack your bags; it’s time to explore Croatia! 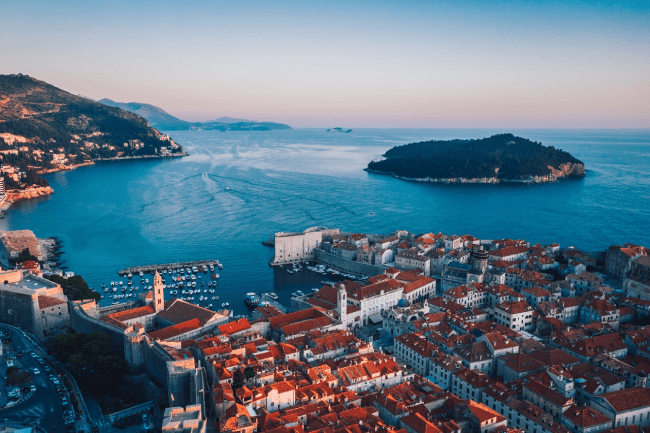 The local culture is the result of a complex history. The country was part of the Ottoman Empire, the Austro-Hungarian Empire, and Yugoslavia, so it’s a territory where cobblestone streets can share pieces of different moments in world history.

But you’ll find so much more than an ancient city. The country is blessed with gorgeous beaches and more than 1.000 Croatian islands; therefore, there’s a lot for you to explore on the Dalmatian Coast for example. Besides that, in general, nature was very generous when creating Croatia, something you can testify in the parks or traveling to the mountains.

As you can imagine, there are a lot of places to visit in Croatia. Below you can learn about the main destinations in the country so you can choose which ones you will include in your itinerary.

Dubrovnik and things to do there

Dubrovnik is a stunning city on the Adriatic Sea. It was added in 1979 to the UNESCO World Heritage Site as a recognition of its outstanding medieval architecture and fortified old town. So you have historic attractions and spectacular beaches in the same place.

Besides that, since the city hosted the large scenes from Game of Thrones, many fans love to visit the series’ locations. Read the below spots to include in the itinerary.

The Dubrovnik walls were shaped in the 13th century. They have 2km of extension and are 25m high at some points. They surround the postcard-perfect Old Town, and tourists can walk on the walls to enjoy a beautiful view of the ocean and the city.

The palace was the seat of the Rector of the Republic of Ragusa between the XIV and XIX centuries. It was also the seat of the Minor Council and the state administration. The building has an exciting combination of architectural styles. It was built Gothic, but it also brings Renaissance and Baroque elements as well.

The Pile Gates was the entrance to the Old Town of Dubrovnik. It was built in the XV century and used to have a wooden drawbridge that used to be pulled up at night to prevent invaders from entering the medieval city.

Dubrovnik is not a big city but offers many options to enjoy the beach. You can choose Koločep Island if you want someplace quiet and with fewer visitors or Copacabana and Uvala Lapad for easy access and family fun.

Split and things to do there

Croatia’s second-largest city, Split is one of the best places to visit in the country. It has been a UNESCO World Heritage Site since 2014. The Old Town has many historical attractions, and you can enjoy a beautiful view of the mountains in the background.

The leading historical site to visit in Split, the palace was built in the IV century. It holds the military camp, the Golden Gate, and the villa where the Roman emperor Diocletian retired.

The St. Duje’s Cathedral was the Diocletian’s mausoleum. The central portion of the cathedral structure dates to 350, which makes St Duje’s the oldest cathedral building in the world. The construction has Roman elements and treasures like the romanesque wooden doors that have been the same since 1200.

It’s also a historical spot to remember the Diocletian era. The Peristil Square was the original Roman court. The place was where Diocletian made his public appearances, and his loyal subjects would prostrate themselves in front of the former emperor. The plaza still has two 3,500-year-old Egyptian sphinxes brought by Diocletian to Split.

For a day trip or overnight stay from Split, we recommend this beautiful national park, with its picturesque chain of 16 terraced lakes and 295 sq. km of forest reserve. Definitely one for the nature lover, youll have plenty of photo ops here! We recommend going and spending at least 2 night there to enjoy all it has to offer.

Hvar and things to do there

Hvar island is one of the paradisiac spots with beautiful beaches on the coast. It is an excellent choice if you are looking for a destination to see beaches and history. The small island is a nice place to enjoy art galleries, boutiques, and cafes.

These islands are a peaceful and uninhabited archipelago on Hvar’s southwest coast. You can get a water taxi or rent a motorboat to get there. The serene beaches are fantastic for a seaside promenade, but you can also find places like Palmizana, which has beach bars for food and drink.

Many visitors consider it as the best beach on Hvar. Located on the south coast, Dubovia offers very clear blue Adriatic waters. Besides the beautiful landscape, it’s easy to get there by car or scooter.

The ancient Cathedral is in the main square of Hvar town. The church is a treasure of renaissance art. Those who love art will be amazed by the works of Palma Junior, Stefano Celesti, and the lesser-known Spanish painter Juan Boschettus. But the must-see piece is Madonna and Child, a Venetian work from an unknown artist dating from the 1220s.

Not in Hvar but nearby islands, in the Golden Horn, is the Zlatni Rat. The beach is one of the best places to visit in the region, and you can quickly get there by ferry ride from Hvar, Split, or Bol. A good choice for a day trip!

Zagreb and things to do there

Among the major Croatian cities, the capital city is worth visiting! Zagreb still has a small-town charm with historical places and straight cobblestone streets. It makes the intersection between Eastern and Central Europe for centuries, and you’ll find unique locations that resemble Prague and Budapest.

Zagreb used to be two different settlements: Kaptol and Gradec. In Kaptol, the prominent landmark is the Zagreb Cathedral, a building that dates to the city’s earliest year but was razed by the Mongols’ invasion in the 1200s. The cathedral’s fortifications are also fascinating. They were an observation tower during the Ottoman wars.

This was the second settlement, Zagreb’s medieval core, populated by artisans and merchants. It’s a beautiful old district for promenades and enjoying cafes and restaurants. If you want some landmarks to visit, you must include St. Mark’s Church and the town gate on Radićeva Street in the itinerary.

The museum in the Lower Town is an excellent ask for those who love art attractions. It displays pieces donated by the art collector Ante Topić Mimara, including works from Rubens, Velazquez, Goya, Monet, Renoir, and Degas.

Zadar and things to do there

Zadar is located on the Adriatic Coastline and boasts one of the world’s most beautiful sunsets. It’s among the best places to visit in Croatia, with rich history and full of heritage. There are many Roman ruins and interesting churches to see in the historic city.

Nikola Bašić created the award-winning art installation in the coastal city in 2005. The organ has a series of large marble steps leading down to the ocean. Beneath each platform, a tube makes musical notes when the waves break underneath.

Zadar gathers a collection of historic churches, but if we have to remark on only one of them, it is St. Donatus. The early-Byzantine church was built in the year 800 and is in an excellent state of preservation. A symbol of Zadar, the construction shows the beauty of this pre-romanesque building.

Pula and things to do there

Pula is in Croatia&#039;s Istrian peninsula, part of the ancient towns in the country. The place holds souvenirs like an amphitheater, temples, and a collection of arches that have survived for 2,000 years.

Pula’s emblematic Roman Amphitheatre is one of the most complete in the world. Like in Rome, you can visit the underground passages where Gladiators used to go to the Arena and the cisterns that channeled scented water to the 20,000 spectators.

Built during the reign of Augustus, the temple has more than 2,000 years of history. Romans converted the construction into a church when they adopted Christianity, and later it became a granary before settling on the role of lapidarium in the 19th century.

The Pula Film Festival has been taking place in the Arena every summer since 1954. It is the oldest Croatian film festival and one of the most significant cultural events on the Croatian calendar.

These are just some of the most popular destinations to visit in the country. Korcula Island, Mljet Island, Kornati Islands, the Plitvice National Park, the Krka National Park, and the Dalmatian coast are among other places to visit, the list is endless.

Once you choose where to go between the best places to visit in Croatia, you must prepare your travel documentation for the trip. Among the documents, you have to apply for the Announcement Form or the upcoming Croatia ETIAS. For a hassle-free arrival, count on iVisa services. Our team is available 24/7 to help you with your document needs, so you can spend your time planning the trip.

Best time of year to visit Croatia and enjoy nice weather on your trip!

Things to do in Croatia: what are the best things to see there