NEW ZEALAND IS CLOSED: New Zealand has not yet re-opened for tourism.

DOCUMENT OVERVIEW
The New Zealand ETA is not currently available as the border is closed to non-residents and non- New Zealand citizens.

WHO CAN ENTER NEW ZEALAND WITH THIS DOCUMENT?
Only New Zealand residents and citizens and their families are permitted to enter New Zealand at this time. All travelers will require a negative PCR, RT-PCR and TMA, LAMP or antigen test result taken within 48 hours before departure. Check the testing FAQ below for further details.

GET THE NEW ZEALAND ETA
If you want to apply for the New Zealand ETA once the border re-opens, you’ll have to provide us with personal information, including travel details. Keep an eye on the iVisa.com website for all the latest travel updates.

DISPLAY THE FORM
After you complete the online application form on our website, we’ll wait for the border to re-open before we submit your application. Our agents will deliver the completed New Zealand ETA to you via email before you start your trip.

Check the FAQs below to view quarantine requirements in New Zealand.

ABOUT COVID-19 SELF-TESTING
Purchase eMed's self-testing COVID-19 kit and get 6 antigen tests sent to your US home address for only $150. Self-test in privacy with a virtual Certified Guide using the NAVICA App. Accurate results are delivered in 15 minutes, which leaves plenty of time to get to the airport. eMed's antigen tests are ideal for travelers on a round-trip journey to this destination from the US.

Do I need a COVID vaccine or vaccination certificate to enter New Zealand?

Yes, all non-New Zealand citizens aged 17 and over must be fully vaccinated to enter the country. Since information may change quickly, we advise you to follow up on the latest New Zealand travel updates and/or contact your local embassy.

Travelers are considered vaccinated if all doses of a vaccine against SARS-Cov-2 have been administered at least two weeks before traveling.

Do I need to take a COVID-19 test before traveling to New Zealand?

Will I have to quarantine on arrival?

What is a New Zealand Electronic Visa?

What is the New Zealand Tourist eTA?

The New Zealand Tourist eTa (NZ Electronic Travel Authority) is an electronic visa waiver that grants the right to enter multiple times to New Zealand. There is no need to make an appointment or present original documents to the Embassy or Consular Office.

What do I need to apply for the New Zealand Tourist eTA?

What is the cost to obtain the New Zealand Tourist eTA?

Applicants will be required to pay the visa cost and a tourist tax, which sums up to USD 57.00 . The International Visitor Conservation and Tourism Levy (IVL), to obtain the New Zealand Tourist eTa. The IVL has been introduced as a way for travellers to contribute directly to the tourism infrastructure and help protect the natural environment they enjoy during their stay in New Zealand. The Visa cost can broken down to:

How long does it take to process a New Zealand Tourist eTA?

How long is the New Zealand Tourist eTA valid for?

The New Zealand Tourist eTa (New Zealand Electronic Travel Authority) is a Multiple Entry visa and has a validity of 2 years after issued. Its expiration date will be specified in your eTA once it’s issued. You may only arrive in the country after the start date stated on your visa, and stay for a maximum of 90 days Per Entry at a time.

What conditions must the applicant’s passport meet for the New Zealand Tourist eTA?

How many entries does the New Zealand Tourist eTA allow?

When should I apply for the New Zealand Tourist eTA ?

The traveler must apply for this eTA at least 24 hours their trip to New Zealand.

What are the yellow fever vaccination requirements for travel to New Zealand?

Proof of vaccination against yellow fever is not required, even if traveling from a country with a high risk of yellow fever transmission.

Does obtaining a Tourist eTA guarantee me entry into New Zealand?

NO. Possession of a New Zealand Tourist eTA does not provide automatic right of entry for the holder into the Country. The Immigration Officer at the port of entry may refuse entry to any person, if he is considers that such a person is unable to fulfil the immigration requirements or that such person's presence in New Zealand would be contrary to national interests or security.

What do I need to present upon arrival in New Zealand?

Upon arrival in New Zealand, you need to present your passport along with your New Zealand eTA reference number.

Which countries are eligible for the New Zealand Tourist eTA?

The following is a list of countries eligible for the New Zealand Tourist eTa: 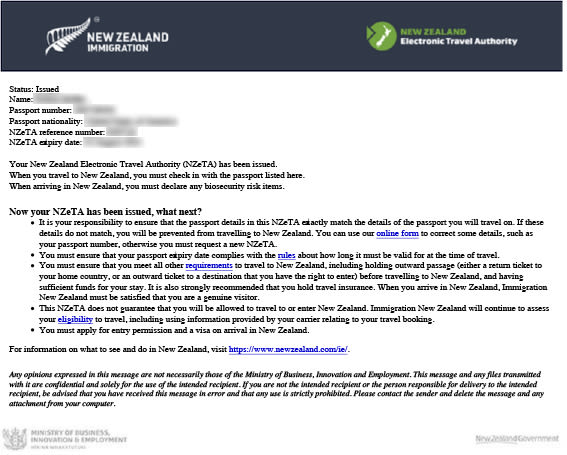 Maybe you’ve read about it. Maybe you’ve been told about the beauty of it. You might have even seen images of its breathtaking scenery… New Zealand, or Aotearoa, as it is called in the Maori language, will enchant you even before you step foot there. New Zealand is an island country made up of two main islands (the North Island and the South Island), located in the South-West Pacific Ocean. It is also made up of around 600 additional smaller islands. In total, the country stretches over approximately 1,600km (1,000 miles) from North to South. In Land area, it is actually larger than the United Kingdom, but with only about four million inhabitants, there’s plenty of wide-open space for visitors to explore. While New Zealand may look like it’s very far away from most other countries on the world map, it’s really just one flight away from many of the world’s major cities. As soon as you arrive, you’ll find a beautiful nation, full of beautiful scenery and people, offering the facilities you’re used to at home – in a landscape that’s out of this world! Similar to most other developed nations, the majority of people live in the main cities of New Zealand, so there are vast areas which are sparsely populated. In New Zealand, it’s very simple to get away from the madding crowd! Located near the top of the North Island, Auckland is the city with the largest population in New Zealand. It is also the most easily accessible city in the country, with easy ways of getting there by all modes of transport. It is also considered a global city, with easy access to key international markets, particularly in the Asia-Pacific region. Auckland also has many tourist attractions which are relatively close to the modern Central Business District (CBD) area. The climate in Auckland is fairly moderate too and is considered one of the cities in New Zealand with the most sunny days per year. A scenic and cosmopolitan destination, the areas around the city of Auckland area perfect for exploring mountains, coastlines and cultural sites. Auckland is home to about a third of the New Zealand’s total population and is ranked as the fourth most diverse city in the world, with over 200 different ethnic communities which call the city home. Approximately one third of all people living in Auckland were born not only not in the city, but actually overseas. The majority of New Zealand’s indigenous Māori population lives in Auckland, and it is also officially the world’s largest Polynesian city. The South Island has a lower population density than the North Island and it is generally agreed that the scenery on this island is far better than on the other one. Some say it is some of the most spectacular scenery on earth. In general terms, New Zealand has some outstanding scenery, a unique culture, delicious wine and food, and many thrilling activities that make the country a world-renowned adventure playground. There are stunning glaciers and fiords of the South Island’s West Coast and incredible volcanoes can be found on the Central Plateau, as well as beautiful beaches, crystalline glacial lakes and stunning scenery which has been showcased in numerous Hollywood films, the most famous of which was the Lord of the Rings saga. Renowned for its extreme sports and adventure activities, New Zealand has many luxurious wilderness retreats where you can relax after a long day and enjoy some delightful cuisine. It is also a destination travelers seek out for its rich Maori culture and the down-to-earth friendliness of its many people. In New Zealand, visitors have the chance to interact with unique wildlife that exists nowhere else on earth, including strange species such as snow dwelling parrots and the kiwi bird. In New Zealand you can access an incredibly vast range of adventure activities…from skiing, hiking and white-water rafting to taking a ride in a hot air balloon, bungee jumping and skydiving. While the weather in New Zealand is generally quite moderate, as it does not usually suffer major climate extremes, it can be changeable, so pack layers and a raincoat. Seasons are the opposite as those of the Northern Hemisphere. Spring through to Autumn is the best time to visit, with peak season being from mid-December to early February.