Trustpilot recommended. We lead the industry in innovation and reputation
────

How to Apply: Electronic Visa Waiver

NOTE: Since January 5, 2023, travelers coming from mainland China will need to take a pre-departure test taken within 48 hours before travel.

THE UNITED KINGDOM IS OPEN- The UK fully re-opened for tourism on 1 November 2021.

In 2016, the United Kingdom launched a system to obtain electronic visas for citizens from Kuwait, Oman, Qatar and the United Arab Emirates. The Electronic Visa Waiver (EVW) application process is very simple and 100% online. Once the application is submitted and accepted, the applicant will receive the Electronic Visa Waiver that must be shown to the immigration officers upon arrival. Yes, it’s that simple.

The Electronic Visa Waiver system is an online method for quickly applying for visas from anywhere in the world. Payment is submitted along with the online application.

We can confirm that UK health authorities aren’t requesting a Covid vaccine at the moment. Still, you need to check what entry requirements are now in...

UK Standard Visa: Travel for those under 18

When you travel to the UK, you are given the unique experience of seeing one of the most incredible places in the world. Embedded into the world's his...

Priority service for the UK standard visitor visa is a service that allows you to fast-track your visa application. This means that your application w...

What is the United Kingdom Electronic Visa Waiver (EVW)?

The UK Electronic Visa Waiver (EVW) is a travel authorization that allows citizens from eligible countries to enter the UK without applying for a standard visa.

What do I need to apply for a UK Electronic Visa Waiver (EVW)?

What is the cost to obtain the UK Electronic Visa Waiver (EVW)?

How long is the UK Electronic Visa Waiver (EVW) valid for?

The UK Electronic Visa Waiver (EVW) has a validity of six months after entering the UK.

Can I extend the validity of my UK Electronic Visa Waiver (EVW)?

No. If you want to stay in the UK for more than six months then you need to apply for another EVW and re-enter the country with your new EVW.

How many entries does the UK Electronic Visa Waiver (EVW) allow?

When should I apply for the UK Electronic Visa Waiver (EVW)?

The traveler must apply for this visa at least 3 Business Days before the trip to The United Kingdom.

What do I need to present upon arrival in the United Kingdom (UK)?

Upon arrival in The United Kingdom, you need to present your passport along with your EVW, which can be printed or shown from an electronic device.

Does obtaining the UK Electronic Visa Waiver (EVW) guarantee me entry into the United Kingdom?

No. The EVW is just a landing authorization. It’s up to the country’s customs authorities to allow entry to a visitor after procedure checking upon arrival.

Should I modify my UK Electronic Visa Waiver (EVW) if my travel plans change?

Yes, you must change your travel details on your EVW if you:

You’ll need your EVW number and your date of birth to change your details.

Which countries are eligible for the UK Electronic Visa Waiver (EVW)?

Only visitors from Kuwait, Oman, Qatar and the United Arab Emirates can apply for a EVW for the United Kingdom 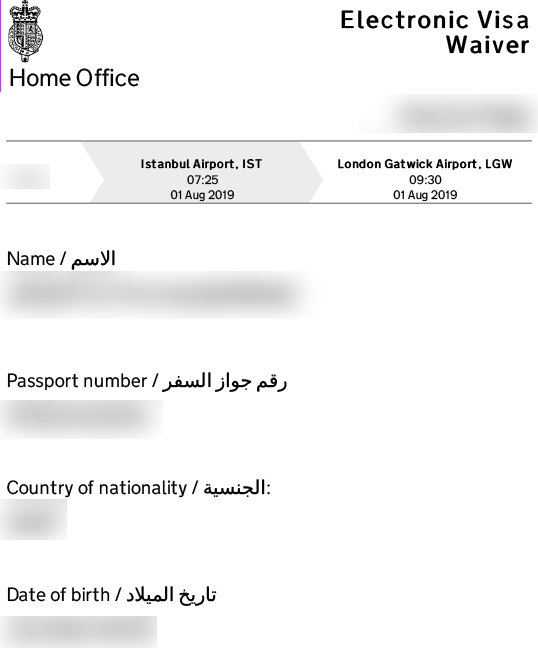 The United Kingdom is not a stranger to tourists. In fact, it is one of the most visited countries in the world. The UK is indeed home to many immigrants, but it is also a great place to visit. There are plenty of things to learn about, see, and do while there. The country has beautiful scenery, and we are not talking about major cities. In fact, most tourists would agree that the most gorgeous places are the ones that are not urbanized.

There is no such thing as the best time to visit the United Kingdom. The weather is tolerable all year round. Of course, nobody visits the country for the weather. In fact, the humidity in the UK is famous. It can rain a lot during the year, and an umbrella is a must-have all the time. Although, the past few years seemed to be more forgiving as far as rain in the summer is concerned. Even so, as long as you are equipped to stay dry at all times, you should have no issues in this regard.

As for what you have to do to enter the United Kingdom, you need to know a little about the country’s visa policy. First of all, there are many nationalities that are visa exempt. We are talking about the citizens of European Union countries, as well as the European Economic Area and EFTA. In this case, tourists only need a national ID card to enter the British Isles.

At the same time, 56 other nationalities are exempt from getting a visa if they plan to stay in the UK for no more than 6 months. The rule applies for only 3 months if they enter the UK from the Republic of Ireland. This time, tourists are required to have a valid passport to cross the border.

Another thing worth mentioning here is that the citizens of 4 countries are eligible for a UK electronic visa waiver. It can be obtained online by the citizens of Kuwait, Oman, Qatar, and the United Arab Emirates. The document can be used for tourism and study, and it grants a single entry. Its holder can stay in the United Kingdom for no more than 6 months. The EVW can also be used to visit Ireland, but only for 90 days once the holder goes through immigration clearance in the United Kingdom.

When we are talking about British Overseas Territories, their visa policies are pretty similar. Just keep in mind that they have distinct policies.

All the other nationalities that are neither visa-exempt nor eligible for the United Kingdom Electronic Visa Waiver must pay a visit to the nearest British diplomatic mission and apply for a consular visa.

Leaving the visa policy aside, let’s talk about what you can see and do in the United Kingdom. Needless to say, you cannot get bored while being there. One of the most popular attractions is, of course, London. The capital city of the UK is a magnificent location. The Buckingham Palace is a must see, and so is Big Ben. A lot of people do not know this, but only the clock is called Big Ben. The tower on which it is displayed is actually called the Elizabeth Tower. It used to be called the Clock Tower, but it was renamed in 2012 after the current Queen Elizabeth to mark her Diamond Jubilee.

While in London, do not forget to take a ride in the London Eye. Also, just walking around the streets of London will give you plenty to see. Do not forget to hit the pubs too.

We think that it would be a mistake to stay in London only. While the city is magnificent, there are plenty of other locations that you will love. For example, you should visit the city of Edinburgh. The Edinburgh Castle is a royal fortress built in the highest point of the city. It is open to visitors, and it looks like it has not been touched by time. You will find it in excellent condition.

You should also go to Bath to admire the Georgian architecture and see the Roman baths. In Kent, you will find the Canterbury Cathedral, which is the seat of the head of the Church of England.

If you are looking for some nature, we recommend the British coast. There are a few gorgeous beaches, but what you will like the most is the scenery provided by the high coastline. The Scottish Moors are breathtaking too. The sights are stunning. Especially in the fall.

British cuisine is often underestimated in the media. We all make our jokes that the UK, despite its run for spices in its history, has bland food. However, that is not portrayed correctly. In fact, British food is delicious. And plenty. You have probably heard about the famous English breakfast. It is a substantial meal that will probably last you the entire day if you are not used to eating that much. The famous fish and chips is almost everywhere, and you cannot leave the UK until you taste it. Even so, you will find many other available cuisines.

Communication will not be an issue since the official language is English. However, depending on what region of the British Isles you are visiting, you will also hear some Welsh and Scottish Gaelic. While the language the Scottish people talk is still English, as a tourist, you will have a hard time understanding it. Moreover, do not think that all British people speak like the Queen or Hugh Grant. In reality, the language is far more relaxed.

Getting around in the UK should come easy for all tourists. There are plenty of means of transport available throughout the country. You will have no issues in finding hotels no matter the budget you have. You do not have to worry about safety either. You must use your common sense, though. Avoid walking alone in the dark in some parts of the cities where there are clubs and pubs. You should also avoid wearing shirts that have the logo of a particular football team on them. Hooliganism is no longer an issue, but British people are huge fans, and you do not want to get in trouble over nothing.

Needless to say, you should put the United Kingdom on your bucket list and visit it at least once. It has a fascinating history full of famous monarchs, magnificent scenery in the countryside, and the whole country is a melting pot of different cultures. You will have plenty to see and experience. The UK is definitely worth the trip.