Get the Hong Kong Pre-Arrival Registration for Indians Now (PAR)

How to Apply: Pre-Arrival Registration

From January 2017, Indian citizens can enter Hong Kong by completing a pre-arrival registration online. This document allows them to enter the country during a transit or for a planned visit to Hong Kong. The permitted stay you have for each entry is 14 days for six months (or until the date your Indian passport expires.) Consider that if you travel by air and do not leave the airport transit area, you will not be required to complete this document.

PLEASE NOTE: Currently, the pre-arrival registration must be presented to the Immigration Officer along with the Health Declaration in order to enter Hong Kong. Hopefully, at iVisa we can offer you both documents without the need to process them at the same airport. Do not need to be worried about anything anymore, because we will take care of the whole process!

What is a Hong Kong Pre-Arrival Registration (PAR)?
This is a program that the Hong Kong government implemented to continue its 14 days Per Entry visa-free requirement for Indian nationals. This program went into effect on Jan 2017.

What are the requirements for an Indian national to apply for a PAR?

If the cost is zero, why do I need to pay for the Pre-Arrival Registration?

In iVisa, you can get your pre-arrival registration document quickly and easily without dealing with any office nor Embassy. Apply now and avoid wasting hours to complete the whole process at the airport. By using our services you will be able to get your document quicker and you will have more time to enjoy your trip!

How long does it take to obtain the Hong Kong PAR?
We offer the option of standard processing time, this means that it will take 2 days to obtain your Hong Kong PAR.

How long should the validity of my passport be?
Applicants who want to visit Hong Kong must have an Indian passport with at least 6 month validity from the planned date of entry.

Which countries are eligible for the Pre-Arrival Registration?

Indian nationals are the only eligible people who can apply for a pre-arrival registration.

It is important to mention that due to the current situations in the world, Hong Kong is now requiring a Health Declaration which is aimed at all nationalities planning to enter Hong Kong. This means that you will not only need a pre-arrival registration, but also, the health declaration.

What should I pay attention to during my stay in Hong Kong and upon departure?

NOTE: In order to prevent the spread of the coronavirus, Hong Kong is now requesting additional health documents, which you should obtain before traveling:

When I apply for a Pre-Arrival Registration from iVisa, am I getting an actual visa?

Our service does NOT provide an actual visa for this nationality. We will provide you a pre-arrival registration document. Upon arrival, you will need to present this letter and your Passport at the immigration area so you will be allowed to enter Hong Kong.

NOTE: Other documents will be required upon entry to Hong Kong, including the Health Declaration, which can be obtained online from our iVisa page.

Where are the Pre-Arrival Registration counters at the Airport?

The counters assigned for pre-arrival registration, are designated to the immigration officers. Once you arrive at the airport, you must go to one of these modules and present your document. We are informed that officials can review your registration in your system, however, we recommend you to always have a physical or electronic copy of the document.

Before arriving at this section, you must approach the border control point staff upon entering Hong Kong and show the QR code of your Health Declaration, along with other additional documents that will depend on your nationality.

Once my PAR is processed, what document will I receive?
You will receive what is called a Notification Slip. You must present this upon entry, along with your Hong Kong Health Declaration. 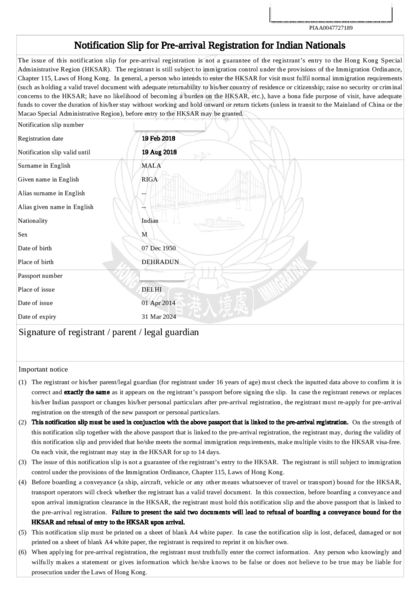