How to Apply: eVisa on Arrival

Since 2012 visitors to Sao Tome and Principe may also apply online for an e-Visa on Arrival using eVisaST website. An e-Visa can be obtained easily anywhere with an internet connection and it grants the same right to enter Sao Tome and Principe territory as ordinary sticker-visa in the passport. The response has been overwhelming and many travelers have already used this service.

Sao Tome is officially called Sao Tome and Principe, and it is a small island nation off the coast of Central Africa. Its economy relies on cacao production, but this has declined due to drought and mismanagement. However, if you are looking to keep yourself busy, you can visit some of its attractions. On the one hand, its lush rain forests are spectacular, and the way old plantations recovered is beautiful. Furthermore, the Obo National Park is a true tropical paradise. At the same time, let's not forget that Sao Tome is surrounded by water, which means that there are pristine beaches and crystal clear waters everywhere. Therefore, it is perfect for diving.

What is the Sao Tome & Principe Tourist eVisa?

What is the cost to obtain a Sao Tome & Principe tourist eVisa?

The process to get a Sao Tome & Principe Tourist eVisa has the following service fee:

How long does it take to get a Sao Tome & Principe Tourist eVisa?

How long is the Sao Tome & Principe eVisa valid for?

Your travel document has to be valid for at least one year after your eVisa expires.
I made a mistake on my application. Can I modify the e-Visa after it’s issued?

NO, we can not change or modify any details on the e-Visa once it's issued. If you do, however, realize you made a mistake before your visa has been issued, then please contact us ASAP via online chat or by sending an email to help@ivisa.com.
How long can I stay in Sao Tome & Principe with an e-Visa?

The maximum stay allowed is 30 days Per Entry.
How many entries are allowed under a Sao Tome & Principe eVisa?

The Sao Tome & Principe eVisa allows applicants a Single Entry into the country and can remain for up to 30 days Per Entry.
What documents do I need to present upon my arrival to get the visa issued?

Can I travel without the authorization letter and get the visa when I arrive?

NO, you cannot. In order to board the plane you must show the visa approval letter to the airlines. This letter is also compulsory in order for you to get the visa at the Sao Tome and Principe airport. Therefore, we recommend that you leave plenty of time to apply for the visa to avoid having to delay or change your flight.
Should I provide the exact date of arrival?

NOT necessarily. The arrival date you provide should be the earliest you plan to arrive, but you can arrive after that date. The departure date is the last day you are permitted to be in the country.
Do all members of a family traveling together need individual e-Visas?

YES. A separate application should be submitted by each member of the family traveling to Sao Tome and Principe. Children included.
Can I travel to Principe Island with e-Visa?

YES. You don't need additional visa or authorization of any kind to travel to Principe Island.
I have more than one passport, if I apply with one, can use the other to enter Sao Tome & Principe?

If you have more than one passport and apply for eVisa with one, you MUST present the same passport to border guards when arriving Sao Tomé, otherwise your eVisa will be invalid.
How do I get my visa at the airport?

Use this checklist for the required documents before entering São Tomé and Príncipe:
Do I have to contact an Embassy or Consulate to double check the process or verify the approval?

NO. An e-Visa is processed directly on-line through the Service for Immigration and Customs, and not through an Embassy or Consulate.
Learn more about Sao Tome & Principe tourism

Sao Tome and Principe is an island nation off the Western Coast of Africa. Most people, after taking a quick look at this pair of islands on a map, would be forgiven for assuming that there wouldn’t be many exciting activities or beautiful landscapes to appreciate in this relatively small country. Yet, Africa’s second-smallest nation, and the smallest Portuguese speaking on Earth, Sao Tome and Principe has so much to offer. For tourists who are looking to get into landscapes, beaches, nature, and relaxed, friendly people, Sao Tome and Principe offers all of that, plus a whole lot more. Sao Tome and Principe is sometime referred to as “the Centre of the World” due to the fact that these islands lie exactly where the Equator crosses the zero-meridian line. Sao Tome and Principe consists of two archipelagos around the two main islands of Sao Tome and Principe. The two main islands lie approximately 140 km apart from one another and the country is about 250 km off the northwestern coast of Gabon, in the Gulf of Guinea. Principe is the older of the two islands, at approximately 31 million years old. Sao Tome is about half as old. Together they form part of a chain of volcanoes known as the Cameroon Line. The current inhabitants of Sao Tome and Principe are predominantly of African and mestizo descent. The main religion in the country is Catholicism, with the most important dates on the country’s calendar belonging to this religion’s festivities. Sao Tome and Principe has been an independent nation since 1975, but the legacy of Portuguese rule can still be seen in the country's culture, customs, and music. The combination with African cultures, which originally arrived on the islands to work the plantations of the Portuguese, has created a uniquely local culture. Decades ago, Sao Tome and Principe used to be commonly known as the “Chocolate Islands” thanks to its many cocoa plantations and the chocolate products that were produced from said Cocoa. Some historians stated that it was one of the best quality chocolates in the world. Unfortunately, due to economic challenges in the 1980’s and 1990’s the country’s cocoa industry collapsed, and today there are only a few plantations that survived, all of which are privatized. Of the two main islands, Sao Tome is more developed, while Principe is more remote and mysterious. Principe also has better beaches, according to those who have been to both islands. When visiting the country, most visitors start their holiday with a couple of days on Sao Tome before heading over to Principe to enjoy the secluded wilderness and beaches. There is plenty of wilderness to enjoy in this island paradise, as 90% of the country is forested, with 40% being officially protected. Sao Tome is famous for being home to the highest concentration of endemic bird species in the world. Bird watchers love coming to the islands to spot rare species that cannot be found anywhere else on Earth. The islands are also home to more than 700 plant species, and more are being discovered every year. This abundance has led Sao Tome and Principe to often be compared to the Galapagos Islands, or referred to as the Galapagos of the Atlantic. Even in the surrounding waters there are many endemic species of fish, sea turtles, dolphins and whales. The climate in Sao Tome and Principe is tropical, with temperatures remaining between about 27 and 29 degrees Celsius throughout the year. There are two dry seasons, running from June to September, and from December to April. The rainy seasons go from March to May and from October to November. The beaches on Sao Tome and Principe are stunning, and perhaps most importantly, there is usually hardly anyone else around! You may stumble across a local fisherman, but you won’t feel the need to be up at the crack of dawn to claim a sun lounger. Depending on when you visit, you may get to see turtles coming up onto the beaches to lay their eggs or the baby turtles hatching and making a dash for the safety of the sea. Sao Tome and Principe is home to Olive Ridley, Green, Leatherback and Hawksbill turtles, all four species being listed as endangered.

One of the best things to do on Sao Tome and Principe is beach hopping by boat, stopping for snorkelling and picnics along the way. You might recognise Banana Beach on Príncipe from the famous Bacardi advert back in the 1990s. It’s one of the the most iconic and photogenic! Make sure you spend some time in the capital of the island, Sao Tome town, which was founded in 1485 by the Portuguese and granted city status by the king in 1535. With Portuguese colonial architecture, cathedral, Presidential Palace and a 16th century fort just for starters, you can easily spend a day exploring here. 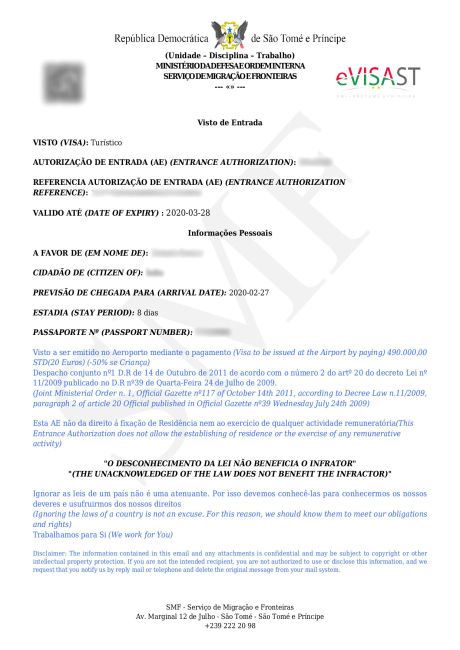