How to Apply: eVisa GBAO

TAJIKISTAN IS OPEN- Tajikistan has re-opened for tourism.

In January 2016, the Republic of Tajikistan introduced electronic visas, or e-Visas, allowing short-term visitors to obtain a visa effortlessly. These e-Visas allow foreign citizens who want to visit the country for tourist purposes to complete an electronic application and receive the electronic visa without visiting a consulate. They no longer need to deal with long lines at Tajikistan consulates or at the border.

The e-Visa GBAO is an official document permitting entry into and travel within Tajikistan and the autonomous region of Gorno-Badakhshan, which requires a special permission in addition to the Tajikistan E-Visa. You can only apply for an e-Visa GBAO only if you are outside the territory of Tajikistan. Applicants will receive their visas via email, after filling out the application form with the necessary information, and once the online credit card payment is completed.

NOTE: Only required if visitor is planning on visiting the GBAO region.

Do I need a COVID vaccine or vaccination certificate to enter Tajikistan?

No, you don't. As of today, COVID vaccination passports or certificates are not a mandatory to enter Tajikistan. Since information may change quickly, we advise you to follow up on the latest Tajikistan travel updates and/or contact your local embassy.

Do I need a COVID-19 test result to enter Tajikistan right now?

What is the Tajikistan e-Visa GBAO?

It is a document that allows travelers to enter the GBAO region, since it requires a separate permit/visa. GBAO is Gorno-Badakhshan Autonomous Region in Eastern Tajikistan.

What is the cost to obtain a GBAO e-Visa?

What do I need to apply for a GBAO e-Visa?

How long does it take to process a GBAO e-Visa?

It depends on the  processing time you choose. We offer three options:

How long is the Tajikistan e-Visa GBAO valid for?

The electronic visa GBAO for Tajikistan is valid for 90 days after issued. It is a Single Entry visa and allows for a maximum stay of 60 days in Total.

What conditions must the applicant’s passport meet for the Tajikistan GBAO e-Visa?

Applicant’s ordinary passport should have at least 6-months validity from the time of entry into Tajikistan and at least one blank page.

Who is eligible for Tajikistan e-Visa GBAO?

Citizens of certain countries are eligible to apply for the Tajikistan e-Visa GBAO, provided that they meet the required criteria. Scroll to the top of the page to determine the visa requirements for your country.

When will my e-Visa GBAO for Tajikistan expire?

Once issued, the Tajikistan e-Visa GBAO must be used for entry to Tajikistan within 90 days after issued, or else it will be considered expired.

How many entries do I get with the Tajikistan e-Visa GBAO?

The Tajikistan e-Visa GBAO allows for a Single Entry.

What is the difference between the e-Visa and the GBAO e-Visa?

Am I allowed to visit any area within the GBAO region with the GBAO e-Visa?

All regions are covered by the GBAO e-Visa EXCEPT for the Lake Sarez region, which requires its own permit. This can be obtained at the Committee for Emergency Situations at Lohuti Street in Duhanbe.

If I am traveling with children, are they required to apply for the Tajikistan e-Visa GBAO?

Yes, they are. It is required that each applicant, even if they are a minor, apply for Tajikistan's e-Visa.

Can I obtain a multiple entries to Gorno-Badakhshan Autonomous region (GBAO)?

No, It’s only for a Single Entry.

Do I need to enter Gorno-Badakhshan Autonomous Region (GBAO) on the exact date specified on my e-Visa?

Yes. You should enter Gorno-Badakhshan Autonomous Region (GBAO) on the date specified on your e-Visa.

Vaccination requirements to travel to Tajikistan

More information in the following link 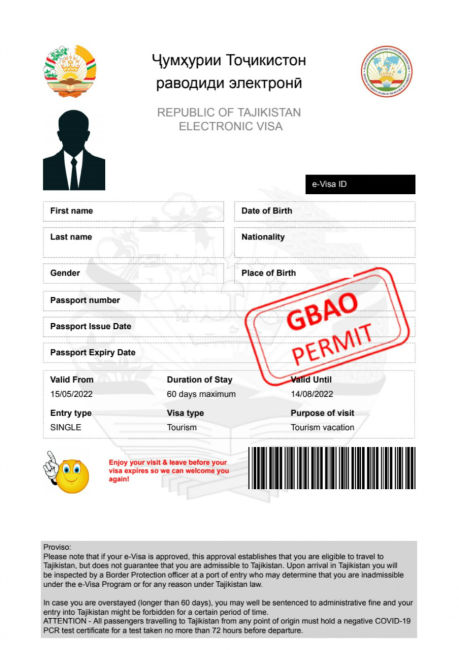 Most people don’t know a thing about Tajikistan. Some people know that it was formerly a part of the Soviet Union. Some know that it is landlocked, rugged and beautiful. But, by far, the most characteristic thing about this beautiful country, is the hospitality of its people. The population of Tajikistan is simply the most down to Earth, friendly and generous that most travelers will ever encounter. Visitors are pleasantly surprised by the fact you can simply knock on any door and ask “Chai? Plov?” and the local family will most likely reply something along the lines of “Sure, come in. Drink my tea, eat my plov and sleep in my house.”. And they will never just give you a simple meal. They will offer you more than even what they have as it is custom to shower guests with the best hospitality. It is even more impressive when you realize Tajikistan is the poorest of all Central Asian countries. Over 50% of the gross national product comes from remittances, or people working abroad sending money home. Tajikistan is bordered by Afghanistan to the south, Uzbekistan to the west, Kyrgyzstan to the north, and China to the east. Travelers will usually arrive in Dushanbe, which is in many ways similar to other former Soviet Union cities in Central Asia. The city is sprawling, with a mix of large, wide boulevards and smaller residential streets. There are certain unique and charming aspects of the city that make it authentic for visitors. Of course, there are museums, theatres, opera and ballet, but it is also possible to uncover traditional chai-honas (teahouses), Qalas (castles), and beautifully designed mosques and holy sanctuaries. The Kuhistani Badakhshan Autonomous Region, also known as Gorno-Badakhshan (GBAO) is an autonomous region in eastern Tajikistan. It is located within the Pamir Mountain range and represents about 45% of the total land area of the country. Large as it is, only about 3% of the population live here. The true beauty in the country though is to be found outside of the city. Many visitors opt to see the Fan Mountains, with its beautiful peak, glacial lakes and challenging hiking routes. It is here where you will have the best chance to experience true hospitality in Tajikistan.

The country also has a very rich history. Although the independent Republic of Tajikistan was only born after the collapse of the Soviet Union, Tajik civilization goes back over 3,000 years. Evidence of the country’s incredible culture can be seen in its architecture, which includes medieval mosques, Soviet era buildings and monuments, and the ruins of ancient cities. If it is authentic local food you are after, then seek no further. Here, you can enjoy plov (similar to Persian pilaf) at almost every corner, as well as shashlik and qurutob (a dish that consists of layered crispy bread, yoghurt, tomatoes and onion, with meat being optional).
Getting to Tajikistan is becoming cheaper, as more budget friendly airlines have started flying to Dushanbe. Additionally, the cost of living is quite low, so you won’t break the bank while you are in the country. The best time to enjoy Tajikistan is the Northern Hemisphere summer: the markets are overflowing with fresh fruits and vegetables and the days are long and with blue skies.