Get Your Chinese e-Visa on Arrival Now

How to Apply: Business eVisa on Arrival

The Ministry of Foreign Affairs of China has recently introduced the China Business Visa on Arrival for citizens of over 23 countries. This Visa on Arrival allows travelers to enter the country for business purposes and it enables them to stay in China for up to 15 days Per Entry. The China Business Visa on Arrival application process is very simple. You only need to fill out our online form and we will do the rest. You don't need to send off your passport to any embassy as we only require a digital copy. Once the application is submitted and accepted, the applicant will receive a landing authorization that must be shown to the immigration officers upon arrival.

The e-Visa system is an online method of applying for visas from anywhere in the world. Some advantages of this system to the traveler are that visas can be applied for quickly over the internet at any time, from any location and that payment is made online at the time of the application.

What do I need to apply for the China Business Visa on Arrival?

NOTE: Upon arrival at Pudong airport in Shanghai, you will find a Visa on Arrival counter and will be asked to present the following:

The staff at the Visa on Arrival counter will issue your visa.

What is the cost to obtain the China Business Visa on Arrival?

The cost ranges from USD 210.00 to USD 310.00 depending on your nationality. Please use our visa checker to find out the cost for your specific nationality.

How long does it take to process my China Business Visa on Arrival?

When should I apply for the China Business Visa on Arrival?
You must apply for this visa at least 5 days before travelling to Shanghai.

What do I need to present upon arrival in Shanghai?

Upon arrival at Pudong airport in Shanghai, you will find a Visa on Arrival counter and will be asked to present the following:

The staff at the Visa on Arrival counter will issue your visa.

Can I enter China anywhere with this visa?
No. The China Business Visa on Arrival is only available to travelers whose point of entry is Shanghai Pudong International Airport. Exit is valid throughout the national territory.

Must I stay in Shanghai for the duration of my trip?
No. The most important condition for the China Business Visa on Arrival is that the applicant must enter through Shanghai Pudong International Airport. The traveller is then free to travel to other cities. Exit is valid throughout the national territory.

Does obtaining a China Business Visa on Arrival guarantee me entry into Shanghai?
No. Possession of a China Business Visa on Arrival does not provide automatic right of entry for the holder into the Country. The Immigration Officer at Shanghai Pudong International Airport may refuse entry to any person, if they consider that such a person is unable to fulfill the immigration requirements or that such person's presence in China would be contrary to national interests or security. 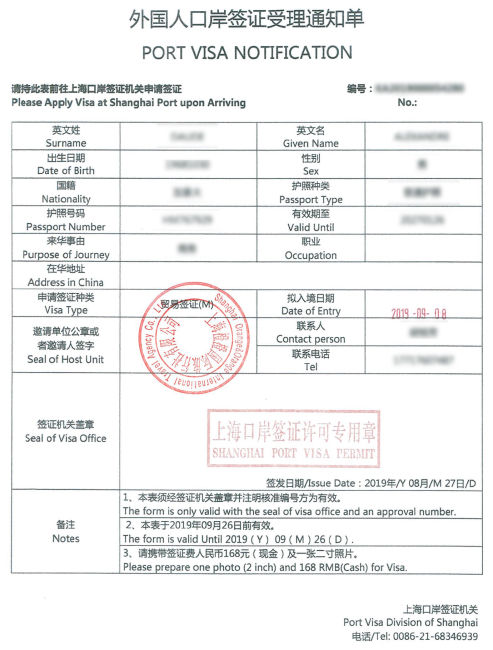 China, which is officially called the People’s Republic of China, is one of the largest countries in the world, as well as the most populated. However, it is also a country rich in culture and heritage. The country continues to be a fascination for western civilization, which is why many tourists decide to visit it each year. If you count yourself among them, know that you will be fascinated by what you will see. With such vast territory come many attractions, and you should have an excellent vacation. But before you start planning your vacation in China, there are a few things that you should know. Below, you will find some useful information as to what to expect as soon as you land in China.

First of all, you should know that most people who wish to travel to China for tourism purposes need to apply for a visa in advance at the nearest Chinese embassy in their home country. For tourism, you need to acquire an L visa, while you need an M visa for business. Very few nationalities are visa-exempt from a period that varies from 15 to 90 days. So, if you are among them, all you need is a valid passport. If not, you must pay a visit to a Chinese diplomatic mission.

The official language in China is Standard Mandarin, which is not an easy language to learn. But it may be necessary to learn a few phrases before departure, especially if you plan to visit rural areas of China. In cities such as Beijing and Shanghai, English is pretty common, and you can get around just fine. Other major cities have English speakers as well. However, the further you get from large cities, the less English you will hear. A pocket dictionary may be useful, but keep in mind that Mandarin is a tonal language. All four tones must be practiced if you wish to be understood.

As far as attractions go, you can easily take your pick. You will find most of them near the coast. That is if you get to see everything you want in the cities. Whether you are a history enthusiast, or you love nature, your passions will be taken care of. You have access to everything from the Forbidden City in Beijing to the stunning sights of Jiuzhaigou. Perhaps you did not know this, but China has the third-largest number of UNESCO World Heritage Sites, right after Spain and Italy.

The southern and southwestern China is the home of the eroded rock formations which hold the name of Karst. It is a sort of limestone, and tourists flock to see it. One of the most popular spots is located in Stone Forest. If you want to see the most amazing sights involving Karst, you should go to Guilin and Yangshuo in Guangxi. In fact, much of the Guizhou province holds such wonders for you to explore.

One attraction that tourists go to China for are sacred sites, and there are plenty. For Buddhist art, you can go to many places. The Yungang Grottoes in Shanxi province holds more than 51 thousand Buddhist carvings which are about 1500 years. You can find them in the recesses and caves of the Yangang Valley. The Magao Caves in Gansu province is the home of art and manuscripts that date as far as the 4th century. Art from the 5th to the 13th century can be found in Dazu Rock Carvings near Chongqing and the Longmen Grottoes.

China also holds numerous sacred mountains. You have access to a variety of Buddhist temples at altitudes of over 3000 meters. Even if you are not a religious person or someone who likes temples, you are going to love the scenery the mountain climbing has to offer. The sights are breathtaking, and your photos will be amazing. Just make sure that you have the approval of monks if you decide to take their picture. It shows a great deal of respects.

If you are looking for tours, China will cater to that desire as well. You can take cruises along the Yangtze River, as well as on the Yellow River. The Grand Canal also provides some beautiful scenery. The Yunnan tourist trail is popular, as is the Overland in Tibet. And let’s not forget about the Great Wall of China. However, do not create high expectations for it. The portions that are usually visited by tourists are really crowded most of the times. Even so, it is a spectacular view from the top.

As to what to do in China, you cannot go there and not take advantage of the fact that Chinese people give some of the best massages in the world. It is usually a job for blind people, but you will relax like you have never relaxed before. You can choose between a head, foot, and a whole-body massage, and we recommend all of them. If you want low prices, you should look for those tiny massage parlors whose staff is blind.

When it comes to food in China, it is good to try a little bit of everything. After all, the entire western civilization likes Chinese food. Except there is called simply food. One thing you should be aware of is that meals that are prepared and left in the hot temperatures will rapidly deteriorate, so make sure to eat from trustworthy places. You should avoid seafood sold by street vendors during the summer. Most restaurants have only one menu in Chinese, so learning some symbols for dishes is advised. Also, tips are considered rude in China. If you leave a tip on the table, chances of the waiter chasing you down to return the ‘forgotten money’ are pretty high.

The crime rate in China depends on the region, but most major cities are incredibly safe. You can even walk as a woman late at night, and you will not be bothered. Petty thieves will have their way, but nothing violent. What you need to be careful about is the scams, such as the teahouse scam. A stranger will engage in conversation with you and then invite you to a teahouse where everything is incredibly overpriced. You will split the bill, but you still lose money. If a stranger strikes a conversation with you and they invite you to eat or drink, take them to KFC or Starbucks. A refusal paired with the persistence in guiding you to a specific place should make you suspicious.

China is a beautiful country worth visiting. As long as you follow a few rules and use your common sense, you are going to have a wonderful time there. For more information, you should do further research as we cannot possibly cover every single aspect in a short article.