CHINA IS CLOSED- China has not yet re-opened for tourism.

What is a China Group e-Visa?

What do I need to apply for a China Group e-Visa?

How long is a China Group e-Visa valid for?

The China Group e-Visa is valid for 30 days after arrival and starts from the entry date in China. However, it is obligatory that the entry to China is within 15 days from the issue date of the visa or it will expire automatically.

I am traveling separately from my tour group. Can I still apply for a China Group e-Visa?

No, as all travelers in the group must travel together during the entire duration of the trip, including arrival and departure.

How many entries come with the Group e-Visa?

Can I work in China with this Group e-Visa?

No. The Chinese Group e-Visa is only for tourist visits.

How will I receive my China Group e-Visa?

Upon approval, we will send you the original via FedEx. We will also provide a PDF copy, sent via email, for your records. Note that you MUST present the original copy upon entry.

What should I do if the data on the processed Group e-Visa does not tally with the one on my passport?

Data inconsistency between the e-Visa and your passport will render the registration invalid and lead to refusal of your boarding and entry into China. You should re-apply by inputting information which is exactly the same as it appears in your passport.

Do I need to send you my passport to receive a China Group e-Visa?

No, you do not. We only need a scan of your passport, as the China Group e-Visa will be issued as a stand-alone document.

Does my tour group have to apply together on one application?

It is advised that one application is submitted for all the members of the tour group to prevent potential delays.

What is included in the online fee for the China visa?

The price that you pay online includes the following:

Can any one apply for the China Visa online?

Can I enter China anywhere with this visa? 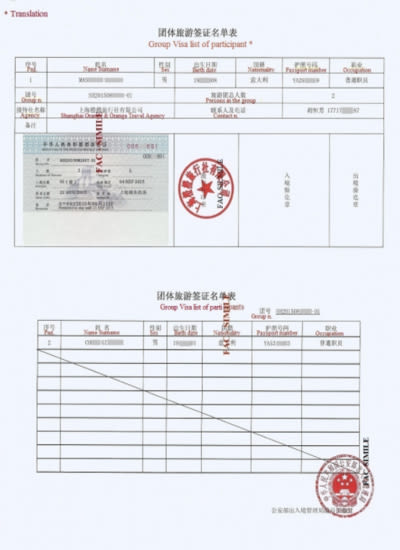 Do I need a COVID vaccine or vaccination certificate to enter China?

No, you don't. As of today, COVID vaccination passports or certificates are not a mandatory to enter China. Since information may change quickly, we advise you to follow up on the latest China travel updates and/or contact your local embassy.

Do I need to get a COVID-19 test to enter China?

Yes! Every traveler will need to display negative results from two COVID-19 tests, a PCR test and lgM antibody test, in order to enter the country. Both tests must be taken with 48 hours of departure.

Is there a quarantine requirement on arrival to China?

Yes, it is mandatory that all travelers to quarantine for 14 days at a government-selected facility or hotel.