ARGENTINA IS OPEN- Argentina re-opened for tourism on 1 November 2021.

DOCUMENT OVERVIEW
Citizens from 71 countries are eligible to get a Electronic Travel Authorization (ETA [AVE in Spanish]) to visit Argentina instead of a traditional paper visa.

Additionally to the ETA (AVE), you can now add a Health Declaration called Argentina Affidavit. You’ll also need this document to enter the country. Get your documents here.

WHO CAN ENTER ARGENTINA WITH THESE DOCUMENTS?
Travelers who are required to show a visa upon arrival are eligible for an ETA as long as they have at least one of the following U.S. visas: B2, J, B1, O, P(P1-P2-P3), E, H-1B. Also, anyone who wishes to enter this country must fill out the Argentina Affidavit 48 hours before their flight. Get started here.

DISPLAY THE FORM
Once you apply, if you have added the Argentina Affidavit (Health Declaration), we will send it to your email before your travel. Make sure you have this document ready to show to the immigration authorities upon arrival. Start the application now.

Visit the FAQs below to view quarantine rules for Argentina.

ABOUT COVID-19 SELF-TESTING Don't waste vacation time searching for a COVID-19 test center. Even if you don't need to take a test to enter Argentina, you will need a negative COVID-19 test result to enter the US. Simplify testing by ordering the eMed self-testing COVID-19 kit online. Pack the test in your suitcase and self-test no more than 3 days prior to your flight back to the US. Check the FAQs to learn more about our trusted testing partner.

Do I need a COVID vaccine or vaccination certificate to enter Argentina?

Yes, Argentina has been taking steps to restore travel within its borders. In order to enter Argentina for tourism purposes, you’ll need to display your COVID vaccine passport or vaccination certificate. The last dose must have been received at least 14 days before entering the country. Since information may change quickly, we advise you to follow up on the latest Argentina travel updates and/or contact your local embassy.

Do I need to take a COVID-19 test to enter Argentina?

Do I have to quarantine when I get to Argentina?

What is the Argentina ETA (AVE)?

The Argentina Electronic Travel Authorization (ETA or AVE, which is Spanish for Autorización de Viaje Electrónica) is for citizens of countries that are required to present a visa when entering Argentina. Now they can process an ETA online instead of getting a traditional paper visa. Citizens wishing to get an ETA should also hold at least one of the following U.S. visas: B2, J, B1, O, P(P1-P2-P3), E, H-1B. Start applying now.

It’s a new travel form that must be completed to enter Argentina by nationals and foreign nationals. This form will help government officials manage the risks associated with the coronavirus pandemic. People over 70 years old are not required to complete the affidavit electronically. Click here to start your application.

Which countries are eligible for Argentina ETA (AVE)?

What do I need to apply for an Argentina ETA (AVE) and the Argentina Affidavit (Health Declaration?

We require the following to submit your application for both documents:

What is the cost to obtain an Argentina ETA (AVE)?

The cost of the Argentina ETA USD 200.00. Additionally, we charge a service fee that would vary depending on the processing time you wish to get:

Note: The prices mentioned above are the cost of the Argentina eTA/AVE. If you wish to add Argentina Affidavit, you just need to add the amount of USD 9.95 to each processing time. Get started here.

How long is the Argentina ETA (AVE) valid for?

The Argentina ETA is valid for 90 days after issued. The Argentine Government will also allow a single extension of the ETA for a similar period of time but only after examination by an Immigration Service Office in the country. Keep in mind that in the case of the Argentina Affidavit, it is valid for a single entry.

What conditions must the applicant’s passport meet for the Argentina ETA (AVE)?

Your travel document has to be valid for at least 6 months after your ETA expires. Also, your passport should have at least one blank page for stamping. Obtain it now.

How many entries does an Argentina ETA (AVE) allow?

When should I apply for an Argentina ETA (AVE)?

We recommend travelers apply for this ETA at least 10 days before their trip to Argentina. Nevertheless, if you add the Argentina Affidavit, we’ll process it 48 hours before your flight so that it can remain valid for your trip. Start the online application process now.

Does obtaining an Argentina ETA (AVE) guarantee me entry into Argentina?

No. The Argentina ETA does not guarantee entry to the country. It’s up to the country’s customs authorities to allow entry to a visitor after procedure checking upon arrival.

What do I need to present upon arrival in Argentina?

Upon arrival in Argentina, you need to present your passport along with your ETA (AVE) and your payment confirmation, which must be printed. The same goes for the Argentina Affidavit, as it is also mandatory upon arrival. Passengers 6 years and older must present a negative COVID-19 PCR test result from a test taken within 72 hours before departure to Argentina.

What are the yellow fever vaccination requirements to enter Argentina?

A yellow fever vaccine is required if traveling from a country with a risk of yellow fever transmission. Apply now. 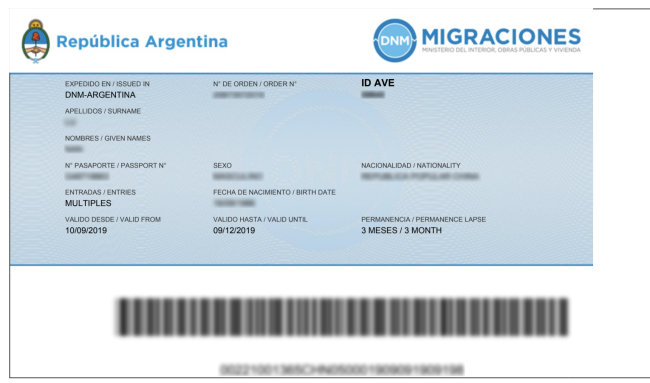 Argentina is the eighth largest country in the world, the fourth largest in the Americas, and the second largest in South America. Located on the South-West Coast of the continent, it shares borders with Chile, Bolivia, Paraguay, Brazil and Uruguay. It is also the largest Spanish speaking country anywhere in the world. Argentina is so vast, you can learn Tango in its capital, Buenos Aires, to waddling around with penguins in Tierra del Fuego, you will be amazed at what you can do in Argentina..

Making your way down toward Patagonia, glacier and mountain regions beyond the scope of imagination are waiting. Argentina also has a ton of beautiful and exciting places to visit, from the rugged Atlantic coastline, home to beautiful beaches and wildlife, such as orcas and seals, to the majestic peaks of the Andes. You could easily plan a trip that takes you all the way from the coast to the ski resorts in the Andes Mountains.

Also, Argentina has many wonderful cultural centers to explore, from the capital, Buenos Aires, known as the “The Paris of South America,” to the beautiful wine country of the Mendoza region. No matter the reason for your visit to Argentina, the food is worth a healthy portion of your time. Every region offers a different variety of dishes, with an endless supply of unique flavors and ingredients. Many simple and hearty dishes are available for the picky eaters or anyone with food sensitivities, however, there are also plenty of ethnic and unusual options for the adventurous.

Cuisine in Argentina is a blend of some of the best flavors from South America and around the world. Argentinian food is an extremely varied thing, the cuisine having been influenced heavily by the large number of European immigrants who have flocked to the country over the last century. Italian fare such as pizza and pasta represent the large population of Italian-Argentinians, and the country’s expansive farmlands mean that steakhouses dominate much of the restaurant scene. Do you have a taste for barbeque? “Parilla” means barbeque, and this style of cooking is the most popular throughout Argentina. They serve a variety of meats including chicken, pork, lamb, and their specialty, beef. Argentine barbeque is prepared over wood coal or charcoal, lending a uniquely South American flavor. Complement your meal with a classic Argentinean wine, such as Malbec, and you will enjoy a feast.

Buenos Aires has a thriving art scene, from street artists to sculptures on display. Like abstract art? Head over to Recoleta Cemetery and take a quick walk toward the man-made marvel of Floralis Generica. It is also the birthplace of Tango. Argentinians are proud of their dance as it speaks an entirely different language. A lot like wine, which can be tasted in many parts of the region. Briefly looking at the history of this lively city dates back hundreds of years with the first settlers coming in from Spain.

It didn’t last long before another conqueror came in and established what is known as Buenos Aires today. Over the centuries, it became an ideal place for cattle ranching and an exporter for leather. Today, it’s a thriving, booming and culturally exquisite city for locals and travelers alike.