How to Apply: Business eVisa

INDIA IS OPEN: India fully re-opened for tourism on 15 November 2021.

DOCUMENT OVERVIEW
Business travelers from more than 160 countries can apply for an India Business e-Visa. This travel document can be used to access India for corporate business reasons, conferences and international trade. Travelers also have the opportunity to add the India Self Declaration Form while applying.

Get your documents here.

WHO CAN ENTER INDIA WITH THESE DOCUMENTS?
Travelers from more than 160 nations can apply for a Business e-Visa. To verify if you’re eligible for that, use the visa checker on our homepage. Get started here.

OBTAIN THE INDIA BUSINESS EVISA
To obtain the India Business eVisa, enter information on the form about your job, employer and reason for travel. Our agents will check the requirements for your application carefully and will clarify the supporting documentation that you might need.

DISPLAY THE FORM
We'll deliver the approved India Business eVisa via email once the application process is complete. Print your document ready to show to the immigration authorities upon arrival. Start the application now.

Visit the FAQ section below to learn more about quarantine rules in India.

ABOUT COVID-19 SELF-TESTING
Don't waste vacation time searching for a COVID-19 test center. Even if you don't need to take a test to enter India, you will need a negative COVID-19 test result to enter the US. Simplify testing by ordering the eMed self-testing COVID-19 kit online. Pack the test in your suitcase and self-test no more than 3 days prior to your flight back to the US. Check the FAQs to learn more about our trusted testing partner.

Do I need a COVID vaccine or vaccination certificate to enter India?

Since information may change quickly, we advise you to follow up on the latest India travel updates and/or contact your local embassy.

Do I need to get a COVID-19 test to enter India?

Is there a requirement to quarantine in India?

Apply for your e-Visa to India now.

No, it's not valid right now. The Indian government recently confirmed that all visas issued before the 6th October 2021 are considered invalid at this time. Applications for the 30-day tourist visa re-opened to individuals on 15th November 2021. Group applications opened on 15th October.

Check back for the latest updates as soon as the government makes any new announcements.

What is an India Business e-Visa?

The India Business e-Visa is an official document permitting entry into and travel within India for business purposes.

How much does an India Business e-Visa cost?

The cost of an India Business e-Visa is USD 27.00 , USD 82.00 or USD 102.50, depending on your nationality. You can use our visa checker at the top of the page to determine what the cost is for your specific nationality.

How long does it take to process an India Business e-Visa?

How long is the Business e-Visa to India valid for?

The Business e-Visa is valid for 1 year after issued.

What conditions must the applicant’s passport meet for the Indian Business e-Visa?

Your passport should have at least six months validity from the date of arrival in India and two blank pages.

What are the ports of entry and exit to India that I may use with the Business e-Visa?

However, travelers can exit from any of the authorized Immigration Check Posts (ICPs) in India.

What do I need to apply for an India Business e-Visa?

How will I receive the Business e-Visa?

Once approved, we will send you the e-Visa via email, which you must present upon entry to India.

Do I need to enter India on the exact date specified in my Business e-Visa application?

The validity period of your e-Visa begins from the date specified in your approved Business e-Visa document. You can enter India on any date within this validity period.

Do I require a yellow fever vaccination when traveling to India?

You can see more information here

What should I do after I receive my Business e-Visa?

Once you have received the approved Business e-Visa, you must print at least one copy of the document and present it to the border authorities upon your arrival in India, along with the same passport that was used for the online application.

It is recommended to keep a copy of the e-Visa with you at all times throughout your stay.

Can I extend my stay beyond the 180-day limit?

No, the duration of stay cannot be extended. However, since the e-Visa allows for double entry, you can leave India and return right away to stay for another 180 days in Total (or when the e-Visa expires, whichever is sooner).

How many entries come with the India Business e-Visa?

India Business e-Visa allows for Multiple Entry within its validity period of 1 year after issued.

The maximum stay for each visit shall not exceed 180 days in Total.

What business activities are allowed under the Indian Business e-Visa?

You are limited to the following business activities:

When should I apply for an Indian Business e-Visa?

As with the Tourist e-Visa, India requires that you apply within 120 days of your intended arrival date. However, you can apply with us at any time, as we will automatically queue your order until it's the right time to process your application. 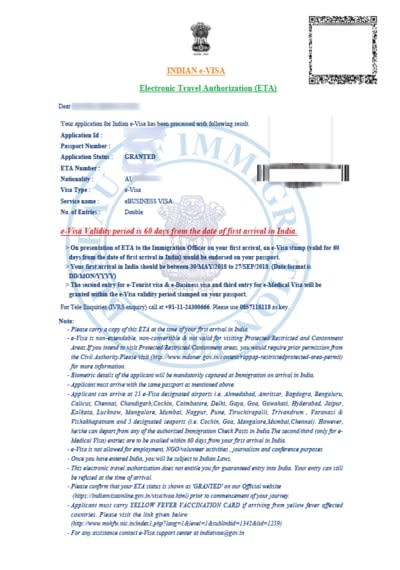