Get your India Medical e-Visa Now

How to Apply: Medical eVisa

DOCUMENT OVERVIEW
Medical travelers from more than 160 countries can apply for an Indian Medical e-Visa. Travelers who use the Medical e-Visa program apply, pay a fee online and receive their electronic visa online all before traveling to India. Unlike the Tourist and Business e-Visas, medical travelers can enter the country up to Triple Entry with the e-Visa.

In addition to the Medical e-VIsa travelers also have the opportunity to add the India Self Declaration Form while applying.

Get your documents here.

WHO CAN ENTER INDIA WITH THESE DOCUMENTS?
More than 160 nations can apply for a Medical e-Visa and get the India Self Declaration Form as well. To verify if you’re eligible for that, we recommend you use our visa checker on our homepage. Get started here.

DISPLAY THE FORM
Once you apply, if you have added the India Self Declaration Form, we will send it to your email before your trip. Make sure you have both documents ready to show to the immigration authorities upon arrival. Start the application now.

Visit the FAQs below to view quarantine rules for India.

What is an India Medical eVisa?

The Medical e-Visa is an official document permitting entry into and travel within India. The purpose of travel must be medical and treatment must be received at a reputed/recognized hospital or treatment center in India. Start applying here.
What’s the India Self Declaration Form?

The India Self Declaration Form is an online document in which you declare your health status and details about your intended stay in India. It is obligatory to enter this country while the coronavirus outbreak is still present. Get your documents on this link.
What do I need to apply for the India Medical e-Visa and the India Self-Declaration Form?

We require the following to submit your application for both documents:

What is the cost to obtain an India Medical e-Visa?

The cost will vary depending on the processing speed. The faster you want to have it, the more you have to pay. These are your options:

Note: The prices mentioned above are the cost of the India Medical e-Visa. If you want to add India Self Declaration Form, you just need to add the amount of USD 9.95 to each processing time.

How long is the Indian Medical e-Visa valid for?

The India Medical e-Visa is valid for 60 days after arrival. This means you must enter India within this period of time. It allows for Triple Entry into the country. As for the India Self Declaration Form, it is valid for a single entry. That means you’ll have to get a new one each time you wish to enter India.
What conditions must the applicant’s passport meet for the Indian Medical e-Visa?

Your passport should have at least six months validity from the date of arrival in India and two blank pages. Get started now.
How many Medical e-Visas can I obtain within a year?

You are allowed a maximum of 3 e-Visas in a given calendar year (January - December). As for the India Self Declaration Form, it doesn’t have a limit for a year because it is valid for a single entry. Apply now.
How will I receive the Medical e-Visa to India?

Once approved, we will send you the e-Visa via email, which you must present upon entry to India. Remember that after you apply for the Medical eVisa, we will also send you the India Self Declaration Form if you add it to your order while applying online.
What should I do after I receive the Indian Medical e-Visa?

Once you have received the approved Medical e-Visa, you must print at least one copy of the document and present it to the border authorities upon your arrival in India, along with the same passport that was used for the online application and your self-declaration form if added. It is recommended to keep a copy of these documents with you at all times throughout your stay. Start your application.
How long can I stay in India with a Medical e-Visa?

The maximum stay allowed is 60 days in Total.
How many entries does the Medical e-Visa allow?

Medical e-Visa allows for Triple Entry, meaning you can enter and leave India Triple Entry during its validity period of 60 days after arrival. Obtain your eVisa now.
What are the ports of entry and exit to India that I may use when using the Medical Indian e-Visa?

You may be required to quarantine upon arrival and you must have a negative COVID-19 RT-PCR test result. The test must be taken within 72 hours before departure. Start your process now.
Do I need to enter India on the exact date specified in my Medical e-Visa application?

The validity period of your e-Visa begins from the date specified in your approved Medical e-Visa document. You can enter India on any date within this validity period.
Do I require a yellow fever vaccination when traveling to India?

It will depend. India will require proof of yellow fever vaccination if you are arriving from a country with a risk of yellow fever. Apply now.
View India e-Visa Sample 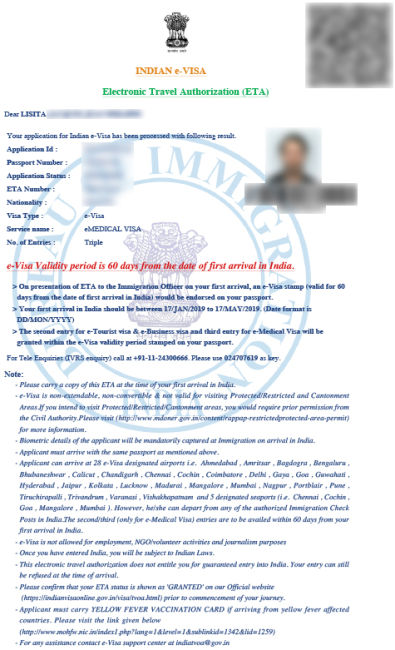 Visa Policy of India
Do I need a COVID vaccine or vaccination certificate to enter India?

No, you don't. As of today, COVID vaccination passports or certificates are not a mandatory to enter India. Since information may change quickly, we advise you to follow up on the latest India travel updates and/or contact your local embassy.
Learn more about India Tourism